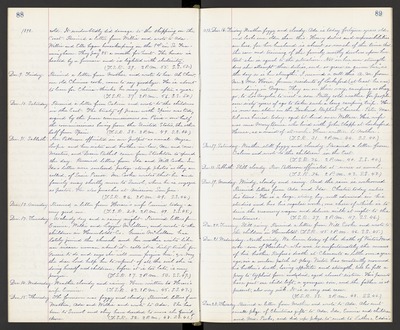 1898. cold. It undoubtedly did damage to the shipping on the Coast. Received a letter from Willie and wrote to Ada. Willie and Etta began housekeeping on the 1st in So. Framingham. They pay $25. a month for rent. The house is heated by a furnace and is lighted with electricity. (T.S.R. 29. 2 P.M. 55. S.S. 52.)

Dec. 10. Saturday. Received a letter from Calvin and wrote to the children in the East. The treaty of peace with Spain was today signed by the peace commissioners in Paris - one-half the commissioners being from the United States, the other half from Spain. (T.S.R. 32. 2 P.M. 49. S.S. 44.)

Dec. 11. Sabbath. Rev. Patterson officiated in our pulpit as usual. Myra Looper and her sister and brother-in-law, Mr. and Mrs. Masters, and Dessie Bethel came from Stockton to spend the day. Received letters from Ida and Will Cooke. In Ida's letter were enclosed "postage - stamp photos" as they are called, of Susie Pascoe. Mr. Cooke writes that he and family may shortly more to Sunol, where he is engaged as pastor. He also preaches at Mission San Jose. (T.S.R. 26. 2 P.M. 49. S.S. 44.)

Dec. 13. Tuesday. A cloudy day and a rainy night. Received letters from Eunice, Willie and Lizzie McLellan, and wrote to the children in Humboldt Co. Gussie McLellan has Lately joined the church and her mother writes like an insane woman about it calls it a "dirty trick" for Gussie to do, and says she "will never forgive her" x.c. May the dear Lord help her to resent of all the evil she is doing herself and children, before it is too late, is my prayer. (T.S.R. 27. 2 P.M. 50. S.S. 47.)

1898. Dec. 16. Friday Weather foggy and cloudy. Ada is today fortyone years old, and looks even older than this. Heavy duties and responsibilities are hers, for her husband is absent so much of the time that the care and training of the family mostly devolves upon her. But she is equal to the situation. Not in her own strength does she attempt these duties, and so grace is given her," as the day so is her strength," I received a call this A.M. from Mr. & Mrs. Hoxie, former residents of Lockeford (at least he was) now living in Oregon. They are on their way, camping as they go, to Los Angeles, to visit a son. Pretty cold weather for people over sixty years of ago to take such a long camping trip. He is now an elder in the Donkard Baptist Church. Peter Martel was buried today aged 61 lived near Wallace. His wife was once Mary Bence who lived with John Clapp at Lockeford House, as a maid of all work. Have written to Mother. (T.S.R. 31. 2 P.M. 44. S.S. 40.)

Dec. 19. Monday. Windy, cloudy and rainy. And the rain is welcomed. Received letters from Ada and Ida. Chester today enters. his "teens." He is a large, strong boy, well advanced in his studies and has his regular work, one chore of which is to drive the creamery wagon and deliver milk at night to the customers. (T.S.R. 37. 2 P.M. 47. S.S. 46.)

Dec. 21. Wednesday. North windy. We learn today of the death of Victor Ward robe son of Herbert who was so unfortunately the means of his brother Rufus's death at Clements a little over a year ago in a melon patch at play. victor has constantly mourned his brother's death, losing appetite and strength, till he fell a prey to typhoid fever and died, aged almost sixteen. His parents have just one child left, a younger son, and the father is at present, also very sick. It is a very sad case (T.S.R. 33. 2 P.M. 48. S.S. 46.)

Dec.22. Thursday. Received a letter from Mother and wrote to Ada. Also sent small pkgs. of Christmas gifts to Ada, Ida, Eunice and children and Mrs. Pecks, and did up pkgs. to sent to Luther's, Eddie's