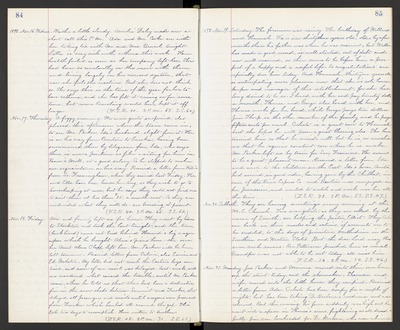 1898. Nov. 16. Wednes. Weather a little cloudy. Amelia Daley made me a short call this P.M. Ada and Mr. Cooke are with her taking tea with MR. and Mrs. Bruml tonight. Lilla is very sick with asthma this week. Her health failed as soon as her company left her. She had been so constantly on the move with them and living largely on her nervous system, that now she feels the reaction. But she does not think so. She says this is the time of the year for her to have asthma, and she has felt it coming on for some time, but more traveling would have kept it off longer. (T.S.R. 40. 2 P.M. 65. S.S. 60.)

Nov. 17. Thursday. A foggy morning. We were quite surprised, also pleased this afternoon when the train came in, to see Mr. Parker, Ida's husband, alight from it. He is on his way from Overton to Eureka, having been summoned there by telegram from Ida, who says there is now a position as filer waiting for him in Vance's Mill, at a good salary. So he stopped to make our acquaintance on his way. Received a letter from Willie from So. Framingham, where they arrived last Friday. He and Etta have been house hunting, as they wish to go to housekeeping at once, but he says they could not find one to suit them at less than $25. a month rent. So they are undecided what they will do are boarding at present. (T.S.R. 40. 2 P.M. 66. S.S. 60.)

Nov. 18. Friday. Ada and family left us for home. They went by team to Stockton and took the boat tonight, and the team (buck board) came out tied behind Howard's big wagon upon which he brought Alma's piano home - the one her Aunt Alma Clapp left her. Mr. Parker will be here till tomorrow. Received letters from Calvin, also Eunice and Ed. Webster. My letter did not reach the Eastern boys on time, and some of our mail was delayed last week, and we wondered what caused the trouble, until Mr. Parker came, when he told us that there had been a destructive fire in the snow sheds between Summit and Truckee, that delayed all passengers and mails until wagons were procured from Truckee which hauled all around the gap . This took two days to accomplish. Have written to Mother. (T.S.R. 42. 2 P.M. 70. S.S. 61.)

1898. Nov. 19. Saturday. The forenoon was rainy. The birthday of Willard and Hannah. He is a now thritythree years old, older by a few months than his father was where he was married, but Willie has made a good record, is well started, out of debt and now well married, so there seems to be before him a prospect of a happy and a useful life. So congratulations are especially due him today. And Hannah, thirtyone years old is anticipating more pleasure now that she is sole house keeper and manager of this establishment, for she has long desired to be so. I board with her and pay twenty dolls. a month. Theresa and George also board with her, and Theresa works for her board, while George pays ten dollars Jim Thorp is the other member of the family and he pays fifteen cents per meal. Celeste is a great care to Hannah but she hopes he will prove a great blessing also. She has trained him so that he minds well but he is so mischievous that he requires constant care when he is awake. Mr. Parker left us by train for San Francisco. He seems to be a quite, pleasant man. Received a letter from Ida and wrote to the children in the East. Ida's horse, Anita, had arrived in good order, having gone by the Chilkat, in case of the River Express Co. and Benton was overjoyed in her possession , and wanted to watch and work over her all the time. (T.S.R. 48. 2 P.M. 55. S.S. 47.)

Nov. 20. Sabbath. They are having meetings every evening at the M.E. Church. Two evangelists, as they are called, by the name of Smith, are helping the pastor, Elliot. They take one back, in their modes and actions, if accounts are to be credited, to the days of primitive Methodism in the Southern and Western States. But the dear Lord may bless eve such means. Rev. Patterson preached here as usual. Grandpa was not able to be out today all miss him. (T.S.R. 36. 2 P.M. 50. S.S. 46.)

Nov. 21. Monday. Joe Parker and Minerva moved into their own house up the street today, and the shoemaker, Sharman and wife, mode into the little house they occupied. Received a letter from Ada. Celeste has been croupy for a couple of nights, but has been taking Dr. Barbour's medicine and was relieved. But this evening, his fever suddenly rose high and he went into a spasm in Theresa's arms, frightening us all dreadfully. Jim ran bareheaded for Dr. Barbour, who soon relieved