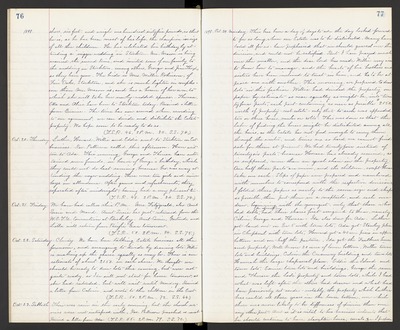 1898. shoes, six feet, and weighs one hundred sixtyfive pounds, so that he is, as he has been most of his life, the champion in size of all the children. He has celebrated his birthday by attending a "nigger wedding" in Stockton. Mr. Mason is being married the second time, and invited some of our family to the wedding in Stockton, among others, George and Jim Thorps so they have gone. The bride is Mrs. Millie Robinson, of Fair Oaks, Stockton, and she is much lighter in complexion than Mr. Mason is, and has a home of her own, to which she will take her newly-wedded spouse. - Theresa, Etta and Alice have been to Stockton today. Received a letter from Eunice. The time has now arrived when, according to our agreement, we can divide and distribute the Estate property. We hope soon to be ready to do so. (T.S.R. 46. 2 P.M. 80. S.S. 74.)

Oct. 20. Thursday. Luther, Howard, Willie and Eddie went to Stockton on Est. business. Rev. Patterson called this afternoon. Have written to Ada. This evening. George and Theresa have entertained some friends, in honor of George's birthday, which they could not do last evening, because Geo was away attending the negro wedding. There were ten girls and nine boys in attendance. After games and refreshments, they separated after midnight, having had a very pleasant time. (T.S.R. 48. 2 P.M. S.S. 74.)

Oct. 22. Saturday. Cloudy. We have been talking Estate business all the forenoon, and arranging to divide by drawing lots. Willie is making up the shares equally as may be. There is an estimate of about $2150. in each share. We thought we should be ready to draw lots this evening, but were not quite ready, so Ida will not start for home tomorrow, as she had intended, but will wait until Monday. Received a letter from Calvin, and wrote to the children in the East. (T.S.R. 50. 2 P.M. 72. S.S. 64.)

1898. Oct. 24. Monday. This has been a day of days to us - the day looked - forward to for so long, when our Estate was to be distributed. Many have boded ill for us - have prophesied that we should quarrel over the division, and could not be satisfied. But I have prayed much over the matter, and the dear Lord has made Willie very wise to know how to manage, and the hearts of his brothers and sisters have been inclined to trust in him, and to be at peace one with another. This morning, we prepared to draw lots in this fashion. Willie had divided the property on paper by estimate as near equally as might be, into twentyfour parts, each part containing as near as possible $2150. worth of property - real estate - only that to each was appended two or three horses, mules or colts. This was done so that the labor of feeding the horses might be distributed among all the heirs, as the Estate has not feed enough to carry them through the winter, and times are so hard we cannot find sale for them at present. We had twentyfour instead of twentysix parts, because Horace has already received, as is supposed, more than an equal share in the property. One half these parts are mine, and the children, except Horace take one each. Slips of paper were prepared and numbered with numbers to correspond with the respective divisions. I folded these papers as nearly to the same size and shape as possible, then put them in a receptacle, and each one drew, beginning with the youngest, only that those who had debts for education - had their shares first assigned to them, namely, Calvin, George and Theresa. Ida also drew for Ada. Luther got land out on Sec. 5 with town lots, Ada got Stanley place in Chaparral with town lots, Howard got a 40 acre piece in upper bottom and one-half the pasture, Ida got the Faulkner house and property, Will Moore 20 acres of lower bottom, Willie town lots and buildings, Calvin the Creamery building and town lots Hannah the large chaparral place, Eddie the Island and town lots, Eunice town lots and buildings, George the same and Theresa the Lodi property and town lots, while I had what was left after the others had drawn and what had been previously set aside - notably, the property which Luther has rented all these years in the lower bottom, over which there was more likely to be differences of opinion than over any other part. And as it is vital to his business interests that he should continue to have slaughter-house, corrals, &.c. I propose