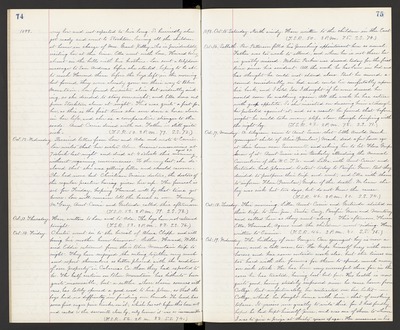 1898. very low and not expected to live long. So hurriedly she got ready and went to Stockton, leaving all the children at home in charge of Mrs. Grant Kelley, who is providentially visiting her at this time. Etta went with Lou, Howard being absent in the hills with his brothers. Lou sent a telephone message to San Andreas before she started, hoping to be able to reach Howard there before the boys left in the morning but found they were already gone on their way to Blue Mountain. Lou found her sister alive but evidently sinking, so she decided to stay overnight, and Etta drove out from Stockton alone at night. This was quite a feat for her, as this is the first time she ever drove a horse alone in her life, and she is a comparative stranger to the roads. Aunt Carrie dined with us. Father is still quite sick. (T.S.R. 50. 2 P.M. 77. S.S. 73.)

Oct. 12. Wednesday. Received letters from Lou and Ada and wrote to Eunice. Lou writes that her sister Alma became unconscious at 7 o'clock last night and died at 4 o'clock this morning aged 42 without regaining consciousness. To the very last, she declared that she was getting better and should recover. She had none but Christian Science doctors, the doctors of the regular practice having given her up. The funeral is set for Friday, hoping Howard will by that time get home. Lou will remain till the burial is over. Fanny McGary, Aunt Carrie and Gertrude called this afternoon. (T.S.R. 52. 2 P.M. 79. S.S. 78.)

Oct. 14. Friday. Chester went in to the burial of Alma Clapp and will bring his mother home tomorrow. Luther, Howard, Willie and Eddie returned from their Blue Mountain trip tonight. They have enjoyed the outing together very much and report themselves as better pleased with the conditions of our property in Calaveras Co. than they had expected to be. The half section on Blue Mountain has hitherto been quite inaccessible, but a settler whose claim comers with ours, has lately opened a good road to his place, so that the boys had no difficulty in finding our bounds. The land has some fine sugar pine timber on it, which has not before this been cut and carted to the sawmill close by, only because it was so inaccessible. (T.S.R. 56. 2 P.M. 83. S.S. 74.)

Oct. 16. Sabbath. Rev. Patterson filled his preaching appointment here as usual. Father was too weak to attend, and when he is not there he is greatly missed. Webster Parker was dressed today for the first time since his accident. All the week he has lain in bed and has thought he could not stand alone. But he moved around considerably in bed, and could lie comfortably upon his back, and I told Ida I thought if he were dressed he would soon be walking again. All the week he has eaten with good appetite. So she insisted on dressing him although he protested against it, and as a result he found that before night he could take many steps alone, though limping with the right leg. (T.S.R. 43. 2 P.M. 78. S.S. 71.)

Oct. 17. Monday. A telegram came to Aunt Susie that little Arnold Mack, youngest child of Alice (Greenlaw) Mack, died a few hours ago at their home near Sacramento, and asking her to let Flora Grupe know of it. Aunt Susie is in Berkeley attending the Annual Convention of the W.C.T.U. and Lilla, with Aunt Carrie and Gertrude, had planned to start today to Pacific Grove. But they decided to postpone their trip, and went, and Etta with them to inform Flora (Greenlaw) Grupe of the death. We learn the boy was sick but two days, but do not know the cause. (T.S.R. 46. 2 P.M. 80. S.S. 74.)

Oct. 18. Tuesday. This morning, Lilla, Aunt Carrie and Gertrude started on their trip to San Jose, Santa Cruz, Pacific Grove and Monterey and called here as they went along. This afternoon, Theresa Etta, Hannah, Agnes and the children went riding. Have written to Eunice. (T.S.R. 46. 2 P.M. 80. S.S. 75.)

Oct. 19. Wednesday. The birthday of our George. Our youngest boy is now a man, and a tall man, too. He keeps himself busy with our horses and has some outside work also, but the times are too hard with the farmers for them to spend much money on sick stock. He has been very successful thus far in the cases he has treated, having lost but few. His health is now quite good, having steadily improved since he came home from College. But unfortunately he contracted one bad habit in College, which he brought home with him - that of smoking tobacco. It grieves me greatly to write this, for I had fondly hoped he had kept himself June, and was one of those to whom I was to give a prize at thirty years of age. He measures in his