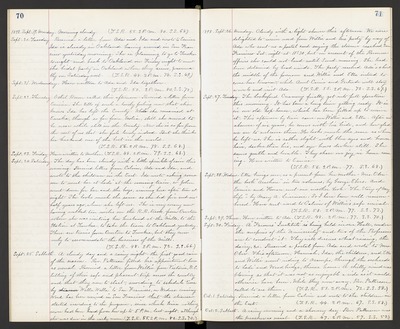 Sept. 20. Tuesday. Received a letter from Ada and Ida and wrote to Eunice Ida is already in Oakland having arrived in San Francisco yesterday morning. She is planning to go to Trucker tonight and back to Oakland on Friday night to meet the bridal party in Oakland when they arrive, presumably on Saturday next. (T.S.R. 48. 2 P.M. 78. S.S. 69.)

Sept. 22. Thursday. Ethel Bacon called this afternoon. Received a letter from Eunice. She tells of such a lonely feeling now that she knows Ida has left the County. While she remained at Eureka, though so far from Scotia, still she seemed to be near while still in the County. Now she is so far from the rest of us that she feels lonely indeed. But she thinks her husband one of the best in the world. (T.S.R. 56. 2 P.M. 78. S.S. 68.)

Sept. 24. Saturday. The day has been cloudy with a little sprinkle of rain this evening. Received letters from Calvin, Ada and Ida, and wrote to the children in the East. Ida wrote asking some one to meet her at Lodi at the evening train, so John went down for her and the boys, arriving here after ten at night. She looks much the same as she did five and one-half years ago, when she left us. She is very weary now having walked ten miles on the R.R. track, from Overton where she was visiting her husband at the Mills, to the Station at Truckee, to take the train to Oakland yesterday. There are trains from Overton to Truckee, but they run only to accommodate the business of the Mills. (T.S.R. 48. 2 P.M. 72. S.S. 66.)

Sept. 25. Sabbath. A cloudy day and a rainy night the first good rain of the season. Rev. Patterson filled his appointment here as usual. Received a letter from Willie from Victoria, B.C. telling of their safe and pleasant trip across the country and that they were to start, according to schedule time by steamer "Walla Walla" to San Francisco, on Wednes. evening. Word has been received in San Francisco that the steamer started according to the program, since which time nothing more had been heard from her up to 5 P.M. last night, although she was due in the early morn. (T.S.R. 55. 2 P.M. 80. S.S. 70.)

1898. Sept. 26. Monday. Cloudy with a light shower this afternoon. We were delighted to receive word from Willie and his party by way of Ada who sent us a postal card saying the steamer reached San Francisco Sat. night at 11:30, but on account of the Revenue officers she could not land until Sund. morning. She had been detained by head winds. The party reached Ada's about the middle of the forenoon and Willie and Etta intend to come here tomorrow, while Aunt Carrie and Gertrude will stay a week and visit Ada. (T.S.R. 55. 2 P.M. 72. S.S. 67.)

Sept. 27. Tuesday. The Lockeford Creamery finally got into full operation this morning. It has been a long time getting ready. It is in our old hop-house, which has been fitted up to receive it. This afternoon by train came our Willie and Etta. After an absence of six years, he comes with his bride, and how glad we are to welcome them. He looks much the same as when he left us. She is rather slight with blue eyes and brown hair, darker than his, and eye-brows darker still. She seems gentle and lovable. They share our joy in home coming. Have written to Eunice. (T.S.R. 56. 2 P.M. 77.S S. 68.)

Sept. 30. Friday. A "Farmers' Institute" is being held in our Hall, under the auspices of the University and two of the Professors are to conduct it. They will discuss wheat raising, the dairy, &.c. Received a postal from Ada and wrote to Mrs. Ober. This afternoon, Hannah, Ida, the children, and Etta and Willie went riding to Ocampo, through the orchards to Lodi and Woodbridge, thence home. A chilly wind was blowing so that it was not as enjoyable a ride as it would otherwise have been. While they were away, Rev. Patterson called to see them. (T.S.R. 51. 2 P.M. 72. S.S. 58.)