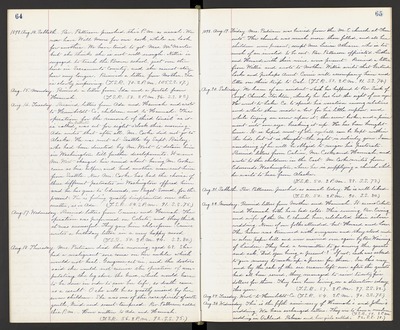 1898. Aug. 14. Sabbath. Rev. Patterson preached this P.M. as usual. We now have Will Moore for our cook, while we look for another. We have tried to get Mrs. McMartin but she thinks she is not well enough. Nettie is engaged to teach the Brown school, just over the line in Sacramento County, and she cannot stay here any longer. Received a letter from Mother. She is slowly improving. (T.S.R. 70. 2 P.M. 105. S.S. 87.)

Aug. 16. Tuesday. Received letters from Ada and Hannah and wrote to Humboldt Co. children and to Hannah. The operation for the removal of "third tonsil" as it is called for Celeste, was set for eight o'clock this morning. Ada writes that after all, Mr. Cooke did not go to Alaska. He was met at Seattle by Supt. Bailey, who had been directed by Mr. Wirt to detain him in Washington till further developments. It seems Mr. Wirt changed his mind about having Mr. Cooke come as his helper, and had another man sent him from Seattle. Now Mr. Cooke has had the choice of three different pastorates in Washington offered him and he has gone to Edmonds, on Puget Sound, for the present. He is feeling greatly disappointed over the matter, as is Ada. (T.S.R. 54. 2 P.M. 91. S.S. 75.)

Aug. 17. Wednesday. Received letters from Eunice and Hannah. The operation was performed on Celeste, and they think it was successful. They gave him chloroform. Eunice writes a birthday letter in a very happy mood. (T.S.R. 50. 2 P.M. 94. S.S. 80.)

Aug. 18. Thursday. Mrs. Putnam died this morning, aged 68. She had a malignant sore come on her ankle which would not heal. Gangrene set in, and the doctors said she would not survive the operation of amputating the leg above the knee, which would have to be done in order to save her life, so death came as a result. O she will be so greatly missed by her seven children. She was one of the rare spirits of earth gentle, kind and sweet-tempered. Rev. Patterson called this P.M. - Have written to Ada and Hannah. (T.S.R. 56. 2 P.M. 92. S.S. 75.)

1898. Aug. 19. Friday. Mrs. Putnam was buried from the M.E. church at Clements. The church was much more than filled, and all her children were present, except Mrs. Lucien Athearn, who is too much of an invalid to be out. Rev. Patterson officiated. Luther and Howard, with their wives, were present. Received a letter from Willie and wrote to Mother. Willie writes that Gertrude Locke and perhaps Aunt Carrie will accompany him and Etta on their trip to Cal. (T.S.R. 50. 2 P.M. 91. S.S. 74.)

Aug. 20. Saturday. We learn of an accident which has happened to Rev. Sink of Congl. Church, Stockton, whereby he has lost the sight of one eye. He went to Lake Co. to spend his vacation among relatives and while there made a bow for his little nephew, and while trying an arrow upon it, the arrow broke, and a piece went into one eye, breaking it up. He has been brought home. It is hoped most of the eyeball can be kept within the lids, but it is thought the sight is entirely gone. I am wondering if he will be obliged to resign his pastorate. Received letters from Calvin, Mr. Cooke and Hannah, and wrote to the children in the East. Mr. Cooke writes from Edmonds, Washington, where he is supplying a church while he waits to hear from Alaska. (T.S.R. 50. 2 P.M. 88. S.S. 73.)

Aug. 22. Monday. Received letters from Mother and Hannah. It seems Celeste and Hannah both have bad colds. This evening, Rev. Ewing and wife of the M. E. church here, celebrated their silver wedding. None of our folks attended but Howard and Lou. The house was trimmed with evergreen and they stood under a silver paper bell and were married over again by Rev. Winning of Linden. They had a committee to go among the guests and ask, "Did you bring a present?" If not, each was asked to give money to make up a purse for them. In this way and by the sale of the ice cream left over after the guests had all been served, they managed to raise twenty five dollars for them. They have been living on a starvation salary this year. (T.S.R. 57. 2 P.M. 97. S.S. 82.)