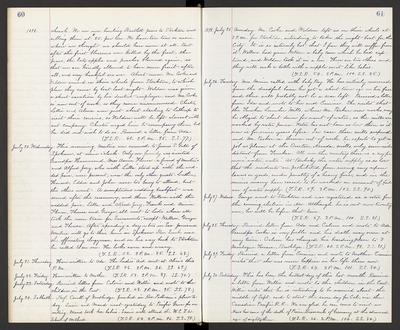 1898. church. We are now hauling Bartlett pears to Stockton and selling them at $25. per ton. We have ten tons or more where we thought we should have none at all. But after the first blossoms were killed by the frost, the pears, the late apples and peaches bloomed again, so that we are kindly allowed to have some fruit after all, and very thankful are we. About noon, Mr. Cooke and Weldon arrived on their wheels from Stockton, to which place they came by boat last night. Weldon was given a short vacation by his dentist employer, and Mr. Cooke is now out of work, so they came unannounced. Chester, Lottie and Alma were just about starting to Lathrop to visit their cousins, so Weldon will be left almost with out company. Chester urged him to accompany them but he did not wish to do so. Received a letter from Ada. (T.S.R. 60. 2 P.M. 95. S.S. 77.)

July 20. Wednesday. This morning, Mertice was married to James S. Gill of Spokane, at nine o'clock. Only our family was invited. Grandpa Hammond, Miss Annie Flower-a friend of Mertice's and Alfred Jovy, who with Lilla "stood up" with the wedded pair, were present, were the only other guests. Luther, Howard, Eddie and John were too busy to attend, but the others went. A sumptuous wedding breakfast was served after the ceremony, and then Wallace with the wedded pair, Lilla and Alfred Jovy, Frank and Annie Flower, Theresa and George, all went to Lodi where all took the noon train for Sacramento, except Wallace, George and Theresa. After spending a day or two in Sac. James and Mertice will go to their home in Spokane. Rev. Sink was the officiating clergyman, and on his way back to Stockton he called to see me. He looks worn and weary. (T.S.R. 52. 2 P.M. 85. S.S. 68.)

1898.July 25. Monday. Mr.Cooke and Weldon left us on their wheels at 3 P.M. for Stockton, intending to take the night boat for the City. It is so intensely hot that I fear they will suffer from it. Wallace had given Weldon a baby coon which he had captured, and Weldon took it in a tin. There are two others and they will suck a bottle with a nipple on it like babies. (T.S.R. 54. 2 P.M. 100. S.S. 85.)

July 26. Tuesday. Mrs. Miner called with baby Ray. He has entirely recovered from the dreadful burn he got a short time ago on his face and there will probably not be a scar left. Received a letter from Ida and wrote to her and Eunice. She writes that the Truckee Lumber Mills, where Mr. Parker now works, may be obliged to shut down for want of water, as the mills are worked by water power. Water has not been so low there as it now is for nine years before. In case those mills suspend and Mr. Parker is thrown out of work, he expects to get a job as planer at the Overton, Nevada, mills, only seven miles distant from Truckee. All over the country there is a cry for more "water, water." At Berkeley the water supply is so low that the residents are prohibited from using any upon lawns or yards, under penalty of a heavy fine, and in the mines many have ceased to be worked on account of failure of water supply. (T.S.R. 59. 2 P.M. 103. S.S. 90.)

July 28. Thursday. Received letters from Ada and Calvin and wrote to Ada. Grandpa Cooke is very feeble and his death may occur at any time. Calvin has changed his boarding place to 3 Montague Terrace, Brooklyn. (T.S.R. 60. 2 P.M. 98. S.S. 81.)

July 30. Saturday. This has been the hottest day of this hot month. Received a letter from Willie and wrote to the children in the East. Willie writes that he is intending to be married about the middle of Sept. and to start the same day for Cal. via the Canadian Pacific R.R. We are glad he can come to visit us. News has come of the death of Prince Bismarck of Germany at the advanced age of eighty three. (T.S.R. 66. 2 P.M. 104. S.S. 84.)