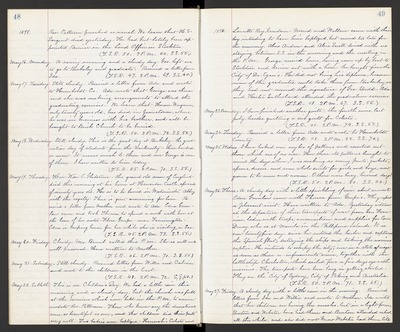 May 17. Tuesday. Still cloudy. Received a letter from Ada and wrote to Humboldt Co. Ada wrote that George was there and she was making arrangements to attend the graduating exercises. We learn that Horace Wagner, only twenty years old, has died in Jamestown, where he was in business with his brother, and will be brought to Brick Church to be buried. (T.S.R. 50. 2 P.M 72. S.S. 58.)

May 19. Thursday. How. Wm. E. Gladstone - the grand old man of England - died this morning at his home at Hawarden Castle, upwards of ninety years old. He is to be buried in Westminster Abbey with the royalty. There is great mourning for him. Received a letter from Mother and wrote to Ada. Edna Greenlaw came and took Theresa to spend a week with her at the home of her sister Flora Grupe near Farmington. Edna is keeping house for her while she is visiting in Sac. (T.S.R. 45. 2 P.M. 73. S.S. 55.)

May 22. Sabbath. This is our Children's Day. We had a little rain this morning and a cloudy day, but the church was full at the exercises which were held in the P.M. to accommodate Rev. Patterson. Those who know say the decorations were as beautiful as ever, and the children did their parts very well. Two babies were baptized. Hannah's Celeste and

1898. Lauretts Roy Knudsen. Maud and Wallace came with their boy intending to have him baptized, but arrived too late for the ceremony. Alice Andrew and Alice Swett dined with us staying between S.S. in the morning and the meeting in the P.M. George arrived home, having come up by boat to Stockton and driven out with a house he brought from the City of Dr. Egan's. He did not bring his diploma, because none of the graduates could take them from Berkeley as they had not received the signature of Gov. Budd. Ada and Hester Sutherland attended the graduation exercises. (T.S.R. 48. 2 P.M. 67. S.S. 56.)

May 25. Wednes. I have looked over my box of patterns and assorted out those which are of no use. How those old patterns brought to mind the days when I was making so many pants, jackets, aprons, dresses, and even whole suits for girls and boys, now grown to be men and women. O those were busy, hurried days! (T.S.R. 50. 2 P.M. 80. S.S. 64.)

May 26. Thurs. A cloudy day with a little sprinkling of rain about sunset. Edna Greenlaw came with Theresa from Grupe's They report a pleasant visit. Have written to Ada. Yesterday witnessed the departure of three transports of war from San Francisco, laden with troops, ammunition and supplies for Com. Dewey, who is at Manila in the Philippine Islands. It is now twentyfive days since he entered the harbor and captured the Spanish fleet, destroying the ships and taking the marines captive. He intends to occupy the city, now in a state of siege as soon as these re-inforcements arrive, together with the battleship Charleston, which sailed four or five day ago with marines. The transports have been long in getting started. They are the "city of Sydney, City of Peking and Australia. (T.S.R. 50. 2 P.M. 71. S.S. 65.)

May 27. Friday. A cloudy day with a little rain in the evening. Received letters from Ida and Willie and wrote to Mother. Ida writes that her children are having the measles, but in a light form. Benton and Webster have had them and Benton attended school all the while , and she did not know Webster had them till