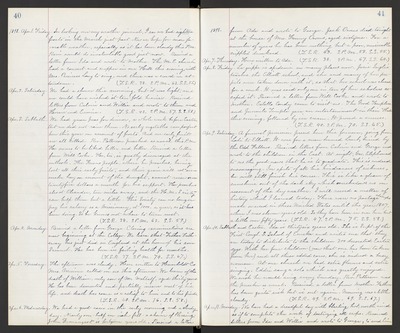 1898. Apr. 1. Friday. In looking over any weather journal, I see we had eighteen frosts in the March just past. Now we hope for more favorable weather, especially as it has been cloudy this P.M. Rain would do incalculable good just now. Received a letter from Ida and wrote to Mother. The M.E. church had a concert and supper in our Hall this evening, with Mrs. Princess Long to sing, and there was a crowd in attendance. (T.S.R. 38. 2 P.M. 68. S.S. 55.)

Apr. 3. Sabbath. We had green peas for dinner, a whole week before Easter. But we did not raise them. No early vegetables can perfect here this year on account of frosts. And our early fruit are all killed. Rev. Patterson preached as usual this P.M. He seems to be liked better and better. Received a letter from Will Cooke. He, too, is greatly discouraged at the outlook. The Fresno people, where he preaches, having lost all this early fruits, and their grain will not even make hay on account of the drought, cannot raise over twentyfive dollars a month for his support. He preaches also at Oleander, ten miles away, and the H.M. Society can help them but a little. This Society can no longer pay his salary as a Missionary, at $1000. a year, as it has been doing. So he knows not where to turn next. (T.S.R 38. 2 P.M. 62. S.S. 59.)

Apr. 4. Monday. Received a letter from George. Closing examinations are now beginning at the College. We learn that Father Trethway has just died in England at the home of his son Samuel. He has been in failing health for months. (T.S.R 37. 2 P.M. 74. S.S. 67.)

Apr. 5. Tuesday. The afternoon was cloudy. Have written to Humboldt Co. Mrs. Minner called on us this afternoon. We learn of the death of William, only son of Mr. Metcalf, aged thirty years. He has been demented and partially insane most of his life, and death has come as a relief to him and to his friends. (T.S.R. 40. 2 P.M. 76. S.S. 58.)

Apr. 6. Wednesday. We had a good rain in the early morning and a cloudy day. Nearly one half an inch fell - a shower of blessing. John Demangeot is fortyone years old. Received a letter

Apr. 8. Friday. La grippe is epidemic in many places now. Josie Inglis teaches the Elliott school, and she and many of her pupils were taken down with it, so that her school was closed for a week. It was said only one in ten of her scholars escaped it. Received a letter from Will Cooke and wrote to Mother, Estelle Condy came to visit us. The Good Templars and Juvenile Temple gave an entertainment in their Hall this evening, followed by ice cream. It proved a success. (T.S.R. 40. 2 P.M. 70. S.S. 65.)

Apr. 9. Saturday. A funeral procession passed here this forenoon, going from Lodi to Elliott. It was for a man named Lamb, buried by the Odd Fellows. Received letters from Calvin and George and wrote to the children in the East. At night, Geo, telephoned to us the good news that he is to graduate. This is indeed encouraging. In spite of all hindrances of sickness, he will still finish his course. This is like a gleam of sunshine out of the dark sky which overshadows us on account of the dry weather. I will record a matter of history which I learned today. There were no postage stamps made or used in these United States until the year 1847, when I was eleven years old. So they have been in use here but a little over fifty years. (T.S.R 47. 2 P.M. 75. S.S. 58.)

Apr. 10. Sabbath and Easter. Ida is thirtysix years old. She is Supt. of the First Congl. S. School of Eureka and writes me that they are today to distribute to the children 300 decorated Easter eggs. With her four children (now that one has been taken from her) and all these added cares, she is indeed a busy woman. At our church we had extra flowers and extra singing. Eddie sang a solo which was greatly enjoyed. We wish he would sing every Sunday. Rev. Patterson was the preacher as usual. Received a letter from Mother. Father has been quite sick but is out again. Morning was a little cloudy. (T.S.R. 49. 2 P.M. 69. S.S. 67.)

Apr. 11. Monday. We have had a dreadful day with blasting, hot, north wind as if to complete the work of destroying all crops. Received letters from Ida and Willie and wrote to George, to send him