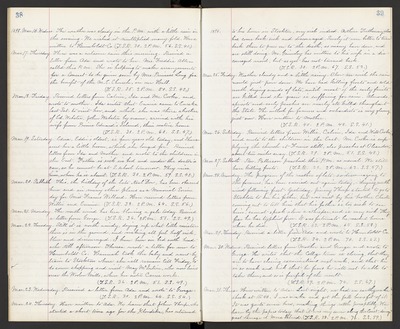 Mar. 17. Thursday. There was a welcome rain this morning. Received a letter from Ada and wrote to her. Mrs. Freddie Allen called this P.M. She is helping to make arrangements for a Concert to be given soon by Mrs. Princess Long for the benefit of the M.E. Church, in our Hall. (T.S.R. 35. 2 P.M. 50. S.S. 42.)

Mar. 18. Friday. Received letters from Calvin, Ida and Mr. Cooke, and wrote to mother. Ida writes that Eunice came to Eureka last Sat, to visit her, and while she was there a brother of Ed. Webster, John Webster by name, arrived with his wife from Prince Edward's Island, their native home (T.S.R. 30. 2 P.M 60. S.S. 47.)

Mar. 19. Saturday. Edna, Eddie's oldest, is four years old today, and I have sent her a little broom, which she longed for. Received letters from Ida and Mother and wrote to the children in the East. Father is sick in bed and under the doctor's care, so he cannot be at S. school tomorrow. They miss him, when he is absent, (T.S.R. 30. 2 P.M. 59. S.S. 48.)

Mar. 20. Sabbath. This, the birthday of the late Neal Dow, has been observed here and in many other places as a Memorial Service day for Miss Frances Willard. Have received letters from Willie and Eunice. (T.S.R. 32. 2 P.M. 64. S.S. 56.)

Mar. 22. Tuesday. Still it is north windy, drying up what little moisture there is in the ground, and making all feel half sick, blue and discouraged. I have been in bed with headache till afternoon. Theresa wrote a letter for me to Humboldt Co. Hannah took the baby and went by train to Stockton where she will remain till Friday, to do some shopping and visit May McIntire, who now lives near the Woolen Mills, Where her sister Carrie works. (T.S.R. 36. 2 P.M. 51. S.S. 49.)

Mar. 24. Thursday. Have written to Ada. We learn that John Thorp, who started a short time ago for the Klondike, has returned

1898. to his home in Stockton, very sick indeed. Arthur Tretheway also has come back sick and discouraged. Surely it were better to turn back than to press on to the death, as many have done, and are still doing. Mr. Grimsley has written to his wife in a discouraged mood, but as yet has not turned back. (T.S.R. 30. 2 P.M. 67. S.S. 52.)

Mar. 25. Friday. Weather cloudy and a little rainy. O how we wish the rain would just pour down . Me have had killing frosts and cold north, drying winds of late, until most of the early fruits are killed and the grain is suffering from rain. Almonds, apricots and early peaches are nearly all killed throughout the State. The outlook for farmers and orchardists is very gloomy just now. Have written to Mother. (T.S.R. 40. 2 P.M. 48. S.S. 41.)

Mar. 28. Monday. The program of the weather of late, so discouraging to the farmers, has been carried out again today, - drying north wind following frost. Yesterday, Jimmy Thorp started to go to Stockton to see his father, but was met by his brother Charlie coming out to tell him that his father is too sick to see him, cannot speak above a whisper, and is very sick, They fear he has typhoid fever. It was fortunate he reached home when he did. (T.S.R. 33. 2 P.M. 65. S.S. 58.)

Mar. 30. Wednes. Received letters from Mother and George and wrote to George. He writes that the College term is closing, that they are to have closing examinations next week, and that he is so weak and sick that he fears he will not be able to take them, and so is fearful of the result. (T.S.R. 37. 2 P.M. 74. S.S. 67.)