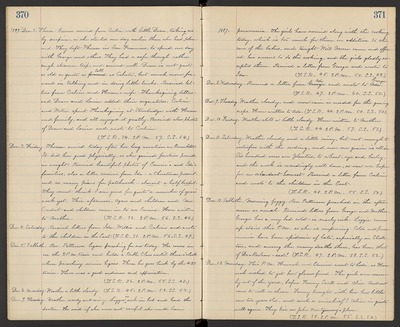 1897. Dec. 2. Thurs. Eunice arrived from Scotia with little Dean, taking us by surprise, as she started one day earlier than she had planned. They left Theresa in San Francisco, to spend one day with George and others. They had a safe, through rather rough steamer trip, and arrived well. Dean is not quite as old or quite as tall as Celeste, but much more forward in talking and in doing little tricks. Received letters from Calvin and Horace's wife - Thanksgiving letters - and Dean and Louise added their signatures. Calvin and Willie spent Thanksgiving at Sturbridge with Horace and family, and all enjoyed it greatly. Received also photos of Dean and Louise and wrote to Calvin. (T.S.R. 34. 2 P.M. 57. S.S. 54.)

Dec. 3. Friday. Theresa arrived today after her long vacation in Humboldt. It did her good physically, as she gained fourteen pounds in weight. Received beautiful photos of Eunice's and Ida's families, also a letter receiver from Ida - a Christmas present - and so many pieces for patchwork - almost a half bushed. They must think I am good for quite a number of year's work yet. This afternoon, Agnes and children and Mrs. Condict and children came in to see Eunice. Have written to Mother. (T.S.R. 32. 2 P.M. 56. S.S.S 46.)

Dec. 7. Tuesday. Weather windy and rainy. Lizzie is sick in bed and had the doctor. He said if she were not careful she would have

1897. pneumonia. The girls have worried along with the cooking today, which is too much for them in addition to the care of the babies, and tonight Will More came and offered his services to do the cooking , and the girls gladly accepted them. Received a letter from George and wrote to Ida. (T.S.R. 45. 2 P.M. 50. S.S. 48.)

Dec. 11. Saturday. Weather cloudy and a little rainy, but not enough to interfere with the seeding, and now our grain is all in. Six hundred acres are planted to wheat, rye and barley, and the work is exceedingly well done , so now we hope for an abundant harvest. Received a letter from Calvin and wrote to the children in the East. (T.S.R. 48. 2 P.M. 55 S.S. 50.)

Dec. 12. Sabbath. Morning foggy. Rev. Patterson preached in the afternoon as usual. Received letters from George and Mother. George has a very bad cold - is nearly sick. Lizzie came up stairs this P.M. so she is improving. Colds and pneumonia have been epidemic of late, especially in Stockton, and among the many deaths there, ahas been the that of Dr. Bulson - sad! (T.S.R. 47. 2 P.M. 58. S.S. 52.)

Dec. 13. Monday. This P.M. Hannah and Eunice went to Lodi, as Hannah wished to get her glasses fixed. The girls were scarcely out of the yard, before Fanny Swett and Alice Andrew came to call on them. Fanny brought with her her little one two years old. and such a mischief! Alice is quite well again. They live on John Montgomery's place. (T.S.R 38. 2 P.M. 55. S.S. 50.)