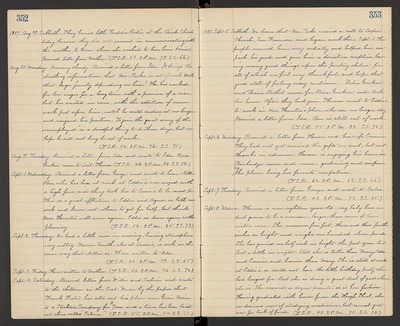 Aug. 30. Monday. Morning cloudy. Received a letter from Ida. It brings the startling information that Mr. Parker is out of work. With that large family depending on him! He has worked for low wages for a longtime, with a promises of a rise, but has waited in vain, with the addition of more work put upon him, until he could endure it no longer and resigned his position. To join the great "army of the unemployed" is a dreadful thing to do these days, but we hope he will not long be out of work. (T.S.R. 54. 2 P.M. 76. S.S. 71.)

Sept. 1. Wednesday. Received a letter from George and wrote to him. Nettie Roso, who has been at work at Eddie's, was seized with a high fever, and they took her to Susie's to be cared for. This is a great affliction to Eddie and Agnes, as both are sick and know not whom to get for help, but think Mrs. Hunter will come again. Eddie is down again with pleurisy. (T.S.R. 56. 2 P.M. 85. S.S. 73.)

1897. Sept 5. Sabbath. We learn that Mr. Perks received a call to Cooper Church, San Francisco, and began work there Sept. 1. The people received him very cordially and helped him unpack his goods and gave him a donation reception, leaving many good things upon the pantry shelves - for all of which we feel very thankful, and hope that good state of feeling may continue. Delia Gnekow and Dessie Bethel came for Rosa Gnekow and took her home. After they had gone, Theresa went to Eddie's to work in Mrs. Hunter's place, who can no longer stay. Received a letter from Ida. Ben is still out of work. (T.S.R. 55. 2 P.M. 88. S.S. 78.)

Sept. 6. Monday. Received a letter from Horace and his wife Eunice. They had not yet received the gifts we sent, but sent thanks in advance. Horace is enjoying his home in Sturbridge more and more, gardening and improving the place being his favorite occupation. (T.S.R. 62. 2 P.M. 83. S.S. 66.)

Sept. 8. Wednes. Theresa is now eighteen years old - my baby has in deed grown to be a woman, larger than some of her sisters were. She measures five feet, three and three - fourths inches in height and weighs one hundred eleven pounds. She has gained one-half inch in height the past year but lost a little in weight. Still she is taller than Mary, Ada and Eunice, and heavier than Mary. She is still at work at Eddie's, so could not have the little birthday party she had longed for. But she is doing a great deal of good where she is. She received a dozen presents, as is her fashion. Having graduated with honor from the High School, she is desirous now of studying medicine, but cannot just now for lack of funds. (T.S.R. 48. 2 P.M. 75. S.S. 70.)