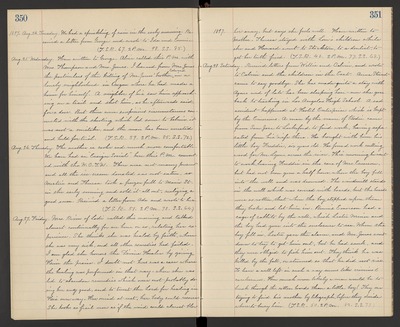 Aug. 25. Wednesday. Have written to George. Alice called this P.M. with Mrs. Thompson and Mrs. Jones. I learned from Mrs. Jones the particulars of the killing of Mr. Jones' brother Edward in a lonely neighborhood in Oregon where he had made a home for himself. A neighbor of his saw him approaching on a trail and shot him, as he afterwards said, for a deer. But there were suspicious circumstances connected with the shooting which led some to believed, it was not a mistake, and the man has been arrested and held for trial. (T.S.R. 59. 2 P.M. 85. S.S. 72.)

Aug. 26. Thursday. The weather is cooler and much more comfortable. We have had an "Ensign Social" here this P.M. connected with the W.C.T.W. There were not many present and all the ice cream donated was not eaten, so Mertice and Theresa took a freezer full to Main St. in early evening and sold it all out, realizing a good sum. Received a letter from Ada and wrote to her. (T.S.R. 51. 2 P.M. 78. S.S. 64.)

Aug. 27. Friday. Mrs. Rixon of Lodi called this morning and talked almost continually for an hour or so, relating her experience. She thinks she was healed by faith, when she was very sick, and all other remedies had failed. I am glad she honors the Divine Healer by giving Him the praise. I doubt not hers was a case where the healing was performed in that way where she was led to abandon remedies which were not probably doing her any good, and to trust the Lord for healing in His own way. Her mind at rest, her body could recover. She looks as frail now as if the wind could almost blow

Aug. 28. Saturday. Received letters from Willie and Calvin. and wrote to Calvin and the children in the East. Anna Stewart came to say goodbye. She has made quite a stay with Agnes and of late has been sleeping here now she goes back to teaching in Los Angelos High School. A sad accident happened at Hotel enterprise which is kept by the Emersons. A man by the name of Bodie came from San Jose to Lockeford to find work, having separated from his wife there. He brought with him his little boy Freddie, six years old. He found work cutting wood for Mr. Lyons, across the river. This morning, he want to work, leaving Freddie in the care of Mrs. Emerson, but had not been gone a half hour, when the boy fell into the well and was drowned. The windmill stands in the well which was covered with boards, but the boards were so rotten, that when the boy stepped upon them they broke and let him in. Bennie Emerson had a cage of rabbits by the well, which Lester Miner and the boy had gone into the enclosure to see. When the boy fell in, Lester gave the alarm, and Mr. Jones went down to try to get him out, but he had sunk, and they were obliged to fish him out. They think he was killed by the fall, or stunned so that he did not rise. To leave a well left in such a way seems like criminal carelessness. How much more likely a man would be to break through the rotten boards than a little boy! They are trying to find his mother by telegraph, before they decide where to bury him. (T.S.R. 50. 2 P.M. 82. S.S. 73.)