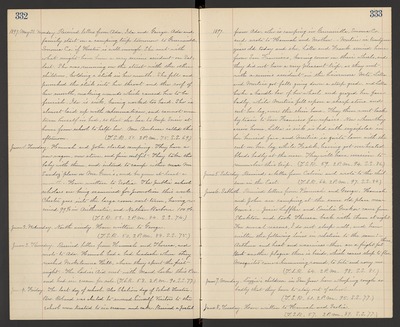 1897. May 31. Monday. Received letters from Ada, Ida and George. Ada and family start on a camping trip tomorrow to Greeneville, Sonoma Co. if Hester is well enough. She met with what might have been a very serious accident on Sat. last. She was running on the street with the other children, holding a stick in her mouth. She fell and punched the stick into her throat and the roof of her mouth, making wounds which caused her to be feverish. Ida is sick, having worked too hard. She is almost laid up with rheumatism, and cannot even turn herself in bed, so that she has to keep Susie at home from school to help her. Mrs. Ambrose called this afternoon. (T.S.R. 50. 2 P.M. 75. S.S. 69.)

June 1. Tuesday. Hannah and John started camping. They have a new wagon, new stove, and fine outfit. They take the baby with them, and intend to camp either near Mr. Sandoz' place or Mr. Greve's, and be gone at least a month. Have written to Scotia. The public school scholars are being examined for promotion this week. Chester goes into the large room next term, having received 99% in Arithmetic, and Nathan Barbour 100%. (T.S.R. 52. 2 P.M. 84. S.S. 74.)

June 3. Thursday. Received letters from Hannah and Theresa, and wrote to Ada. Hannah had a bad headache when they reached Mokelumne Hill, when they spent the first night. The Ladies Aid met with Maud Locke this P.M. and had ice cream for sale. (T.S.R. 53. 1 P.M. 90. S.S. 77.)

June 4. Friday. The last day of school. Also Election day of School Trustee. Bro. Roland was elected to succeed himself. Visitors to the school room treated to ice cream and cake. Received a postal

1897. from Ada, who is camping in Greeneville, Sonoma Co. and wrote to Hannah and Mother. Mertice is twentyone years old today and she, Lilla and Frank arrived home from San Francisco, having come on their wheels, and they did not have a very pleasant trip, as they met with a serious accident in the Livermore Mts. Lilla an Mertice got falls going down a steep grade, and Lilla broke a handle bar of her wheel and grazed her face badly, while Mertice fell upon a sharp stone and cut her leg, over the shin bone, They then went back by train to San Francisco for repairs. Now when they arrive home, Lilla is sick in bed with erysipelas in her bruised face, and Mertice is quite lame with the cut on her leg, while Frank, having got over heated bleeds badly at the nose. They will have occasion to remember this trip. (T.S.R. 59. 2 P.M. 94. S.S. 86.)

June 6. Sabbath. Received letters from Hannah and George. Hannah and John are camping at the same old place near Greve's. - Josie Leffler and Emilie Greckow came from Stockton and took Theresa back with them at night. For several reasons, I do not sleep well, and have written the following lines in relation to the same; - Asthma and heat and weariness - these are a frightful three, But another plague there is beside, which causes sleep to flee, Mosquitos come a humming round, to bite and worry me. (T.S.R. 64. 2 P.M. 98. S.S. 81.)