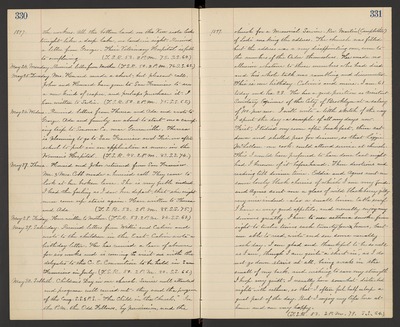 May 26. Wednes. Received letters from Theresa and Ada and wrote to George. Ada and family are about to start on a camping trip to Sonoma Co. near Greenville. Theresa is planning to go to San Francisco next Fri. eve after school to put in an application as nurse in the Woman's Hospital. (T.S.R. 48. 2 P.M. 83. S.S. 74.)

May 27. Thurs. Howard and John returned from San Francisco. Mr. & Mrs. Cobb made a hurried call. They came to look at her broken levee. She is very feeble indeed. I had the feeling as I saw her depart that she might never came up stairs again. Have written to Theresa and Ada. (T.S.R. 52. 2 P.M. 88. S.S. 75.)

May 29. Saturday. Received letters from Willie and Calvin and wrote to the children in the East. Calvin wrote a birthday letter. He has received a leave of absence for six weeks and is coming to visit us with the delegates to the C.E. Convention to be held in San Francisco in July. (T.S.R. 50. 2 P.M. 80. S.S. 66.)

May 30. Sabbath. Children's Day in our church. Service well attended and program well carried out they used the program of the Cong. S.S. & P.S. - "The Child in the Church." In the P.M. the Odd Fellows, by permission, used the

1897. church for a Memorial Service - Rev. Martin (Campbellila) of Lodi making the address. The church was filled but the address was a very disappointing one, even to the members of the Order themselves. He made no allusion whatever to those members who had died and his whole talk was rambling and disconnected. This is our birthday. Calvin's and mine. I am 61 today and he 28. He has a good position as assistant Sanitary Engineer of the City of Brooklyn at a salary of $100. per mo. I will write a little sketch of the way I spent the day - a sample of all my days now. First, I tidied my room after breakfast, then sat down and shelled peas for dinner, so that Lizzie McLellan - our cook - could attend service at church. This I would have preferred to have done last night had I known of it beforehand. Then devotions and reading till dinner time. Eddie and Agnes sent me some lovely black cherries of which I am very fond, and Agnes sent me a glass of wild blackberry jelly very nice indeed - also a small linen table scarf. I have a very good appetite, and usually enjoy my dinners greatly. I have to use asthma smoke from eight to twelve times each twentyfour hours, but am able to read, write and saw some usually each day. I am glad and thankful to be so well as I am, though I am quite a "shut-in", as I do not go down stairs at all, being weak in the small of my back, and wishing to save my strength I keep very quiet. I usually have somewhat disturbed nights with asthma, so that I often feel half asleep a great part of the day. But I enjoy my life here at home and am very happy. (T.S.R. 53. 2 P.M. 79. S.S. 64.)