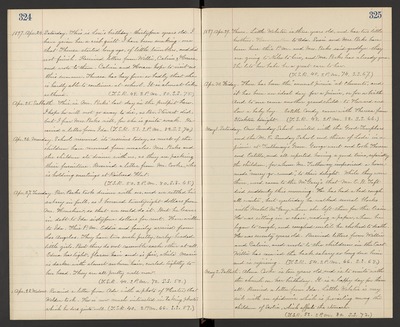 1897. Apr. 24. Saturday. This is Lou's birthday - thirtyfour years old. I have given her a crib quilt I have been making - one that Theresa started long ago, of little tumblers, and did not finish. Received letters from Willie, Calvin & Horace, and wrote to them. Calvin and Horace hope to visit us this summer. Theresa has hay fever so badly that she is hardly able to continue at school. It is almost like asthma. (T.S.R. 48. 2 P.M. 80. S.S. 75.)

Apr. 26. Monday. School resumed its sessions today, as most of the children have recovered from measles. Mrs. Perks and the children ate dinner with us, as they are packing their furniture. Received a letter from Mr. Cooke who is holding meetings at Railroad Flat. (T.S.R. 50. 2 P.M. 80. S.S. 65.)

Apr. 27. Tuesday. Rev. Perks took dinner with us, and we settled his salary in full, as I borrowed twentyeight dollars from Mr. Henshaw, so that we could do it. But he leaves in debt to Ida sixtyfour dollars for rent. Have written to Ida. This P.M. Eddie and family arrived from Los Angeles. They have two such pretty, curly-headed little girls. But they do not resemble each other at all. Edna has light, flaxen hair and is fair, while Marie is darker with almost auburn hair, curled tightly to her head. They are all pretty well now. (T.S.R. 44. 2 P.M. 72. S.S. 50.)

May 1. Saturday. Our Sunday School united with the Good Templars and the M.E. Sunday School and those of Lodi in a picnic at Tretheway's Grove. George went and took Theresa and Estelle, and all reported having a good time, especially the children, for whom Mr. Tretheway improvised a homemade "merry-go-round", to their delight. While they were there, word came to the McGary's that Mr. E. B. Taft died suddenly this morning. He has had a bad cough all winter, but yesterday he walked several blocks with Mabel McGary, when she left there for the train. He was sitting in a chair, reading a paper, when he began to cough, and coughed until he choked to death. He was seventy years old. Received letters from Willie and Calvin, and wrote to the children in the East. Willie has received the back salary so long due him and is rejoicing. (T.S.R. 54. 2 P.M. 66. S.S. 63.)

May 2. Sabbath. Alma Cooke is ten years old, and is to unite with the church on her birthday. It is a happy day for them all. Received a letter from Ida. Little Webster is very sick with an epidemic which is prevailing among the children of Scotia, while affects the stomach. (T.S.R. 52. 2 P.M. 80. S.S. 72.)