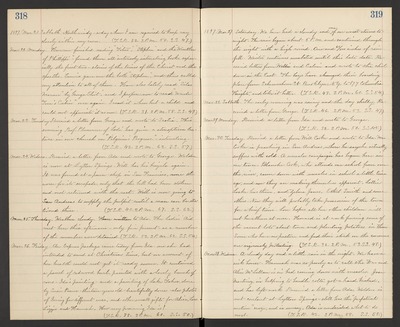 Mar. 22. Monday. Have now - finished reading "Titus", "Stephen" and the "Wrestler of Phillippi" - found them all intensely interesting books, especially the first two - stories of the times of the Christ and the apostles. Eunice gave me the book "Stephen", and thus called my attention to all of them. Have also lately read "Silas Marner" by "George Eliot", and I propose now to read "Uncle Tom's Cabin" over again. I read it when but a child and could not appreciate it as now. (T.S.R. 31. 2 P.M. 58. S.S. 49.)

Mar. 24. Wednes. Received a letter from Ada and wrote to George. Weldon is now at Lytton Springs. Will has his bicycle again. It was found at a pawn-shop in San Francisco, none the worse for its escapade, only that the bell had been stolen and not returned with the rest. Will is now going to San Andreas to supply the pulpit until a man can be stationed there. (T.S.R. 40. 2 P.M. 67. S.S. 62.)

Mar. 26. Friday. An Express package came today from Ida - one she had intended to send at Christmas time, but on account of her health could not get it ready sooner. It contained a hand of redwood burl, painted with a lovely bunch of roses - Ida's painting, and a painting of Lake Tahoe, done by Susie Pascoe - thirteen years old beautifully done also photos of Irving for different ones, and other small gifts for Alice, Lou, Lizzie and Hannah. How very persevering Ida is! (T.S.R. 38. 2 P.M. 60. S.S. 50.)

1897. Mar. 27. Saturday. We have had a cloudy and one of our worst storms tonight. The rain began about 5 P.M. and continued through the night with a high wind. One and 60/100 inches of rain fell. Winter continues unabated until this late date. Received letters from Willie and Calvin and wrote to the children in the East. The boys have changed their boarding place from Schermerhom St. Brooklyn, N.Y. to 177 Columbia Heights, and like it better. (T.S.R. 43. 2 P.M. 60. S.S. 54.)

Mar. 30. Tuesday. Received a letter from Will Cooke and wrote to Ida. Mr. Cooke is preaching in San Andreas, where he says he actually suffers with cold. A measles campaign has begun here in our town. Blanche Cook, who attends our school from over the river, came down with measles in school a little time ago, and now they are making themselves apparent. Lottie Locke has them, and Zelma Jones, Ethel Smith and some others. Now they will probably take possession of the town for a brief time. Lou hopes all her other children will not have them at once. Howard is at work fencing some of the vacant lots about town and planting potatoes in them. Some who have no pasture and feed their stock on the commons are vigorously protesting. (T.S.R. 32. 2 P.M. 53. S.S. 48.)

Mar. 31. Wednes. A cloudy day and a little rain in the night. We have a sick house. Hannah was so poorly as to call the Dr. and Alice McLellan is in bed coming down with measles. Jose Martinez, in helping to handle colts, got a hand kicked, and has left work Received a letter from Ada. Weldon is not content at Lytton Springs - still has the " perpetual motion" craze, and is uneasy. Ada is undecided what to do next. (T.S.R. 42. 2 P.M. 58. S.S. 55.)