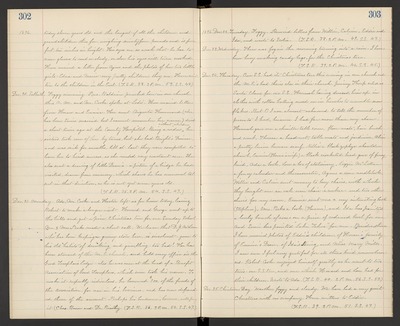 1896. today eleven years old and the largest of all the children and grandchildren thus far, weighing ninetyfour pounds and is four feet, ten inches in height. His eyes are so weak that he has to wear glasses to read or study, or else his eyes will turn crooked. Have received a letter from Agnes and the photos of her two little girls - Edna and Marie - very pretty children they are. Have written to the children in the East (T.S.R. 38. 2 P.M. 53. S.S. 48.)

Dec. 20. Sabbath. Foggy morning. Pres. Baldwin preached here in our church this A.M. and Mr. Cooke spoke at Lodi. Have received letters from Horace and Eunice. Her aunt Augusta Hammond (she has been twice married but I cannot remember her name) died a short time ago at the County Hospital. Being a widow without children her sisters took care of her by turns, but she had Bright's Disease, and was sick for months, till at last they were compelled to leave her to hired nurses, as she needed very constant care. She also sent a drawing of little Dean's a picture of a bridge he had visited, drawn from memory, which shows he has unusual talent in that direction, as he is not yet seven years old. (T.S.R. 35. 2 P.M. 54. S.S. 47.)

Dec. 21. Monday. Ada, Mr. Cooke and Hester left us for home today, leaving Robert to make a longer visit. Howard and George went up to the hills and got a pine Christmas tree for our Sunday School. Mr. & Mrs. Perks made a short call. We learn that D.J. McLean who has been keeping a grocery store here, is insolvent gone to his old habits of drinking and gambling too bad! He has been steward of the M.E. church, and held every office in the Good Templars Lodge - also he was once at the head of a Benefit Association of Good Templars, which even took his name. To make it superbly ridiculous, he borrowed $100. of the funds of the association, for use in his business, and has now defrauded them of the amount. Perhaps his bondsmire, however, will pay it (Chas. Bacon and Dr. Priestley. (T.S.R. 36. 2 P.M. 54. S.S. 47.)

Dec. 24. Thursday. Our S.S. had its Christmas tree this evening in our church and the M.E.'s had theirs also in their church. Jimmy Thorp acted as Santa Claus for our S.S. Hannah having dressed him up in clothes with cotton balling served on in bunches to resemble snow flakes. But O I am almost ashamed to tell the number of presents I had, because I had far more than my share. Hannah gave me a chenille table cover, floor mats, hair brush and comb, Theresa a head rest, table mats and jardinier, Alice a pretty linen bureau scarf, Nellie a black zephyr shoulder shawl, Eunice (Horace's wife) a black crocheted head gear of fancy kind, Ada a book, Lou a box of stationery, Lizzie McLellan a fancy calendar and thermometer, Agnes a nice needle book, Willie and Calvin sent money to buy chairs, with which they bought me an oak arm chair a rocker and two other chairs for my room, Eunice sent me a very interesting book (Stephen), Mrs. Perks a book (Heaven), and Ida has painted a lovely bunch of roses on a piece of redwood burl for me and Susie has painted "Lake Tahoe" for me. Besides these I have received photos of Eddie's children, of Horace's family of Eunice's Dean, of Ida's Irving and Miss Mary Mills. I am sure I feel very grateful for all these kind remembrances. Robert Cooke enjoyed himself greatly as he went to two tries our S.S. tree, and one which Howard and Lou had for their children. Wrote to Ada. (T.S.R. 40. 2 P.M. 56. S.S. 53.)