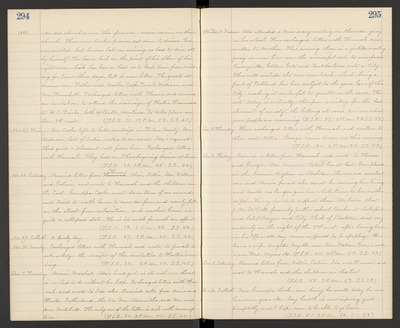 896. attended church service this forenoon - union service in their church. There were twelve persons sat down to dinner. Geo was invited, but he was late in arriving, so had to dine all by himself. He has boil on the point of his elbow of his right arm, which has been so bad as to keep him from writing for two or three days, but is now better The guests at dinner were Father and Mother Cooke, Uncle William, and Mrs. Trumbull. Exchanged letters with Theresa and received an invitation to attend the marriage of Hattie Hammond to W.C. Dierks, both of Butte, Montana, to take place on Dec. 9th next. (T.S.R. 31. 2 P.M. 52. S.S. 45.)

Nov. 28. Saturday. Received letters from Theresa, Alice, Nellie, Ida, Willie and Calvin, and wrote to Hannah and the children in the East. Grandpa Cooke went down town of an errand and tried to walk home to save car fare, and nearly fell on the street from exhaustion, and reached home in quite a collapsed state. He is too weak for such an effort. (T.S.R. 33. 2 P.M. 48. S.S. 42.)

Dec. 1. Tuesday. Mamie Marshall - Ada's hired girl - is ill with sore throat so we had to do without her help. Exchanged letters with Hannah and wrote to Ida also. Received calls from Annie and Hester Sutherland, the two Mrs. Naismith-s, and Mr. and Mrs. Mitchell. The only son of the latter is sick with consumption. (T.S.R. 34. 2 P.M. 55. S.S. 48.)

1896. Dec. 2. Wednes. Ada attended a Missionary meeting in Alameda, going on her wheel. Have exchanged letters with Hannah and written to Mother. This evening there is a jubilee meeting going on near here over the successful vote to incorporate Emeryville, Golden Gate and Butcher town into a City. This will include the new race track, which, being a part of Oakland, has been subject to the good laws of this City, making it unlawful to gamble on the races. The vote today is virtually, therefore, a victory for the bad element of society, the betting at races, S.C. over which good people are mourning. (T.S.R. 37. 2 P.M. 58. S.S. 53.)

Dec. 4. Friday. Received a letter from Hannah and wrote to Theresa and George. Mrs. Margaret O'Neil has at last been placed in the Insane Asylum in Stockton. She needed constant care and Annie found she must be earning her living and could no longer give her whole time to her mother as John Henry failed to support them. Me learn that J.M. McCall, formerly public school teacher at Lockeford, and later Mayor and City Clerk of Stockton, died very suddenly on the night of the 2nd wrist. after having been in his office all day - cause supposed to be apoplexy. He leaves a wife, daughter Myrtle now Mrs. Watson Green, and a son Fred, 17 years old. (T.S.R. 45. 2 P.M. 59. S.S. 49.)