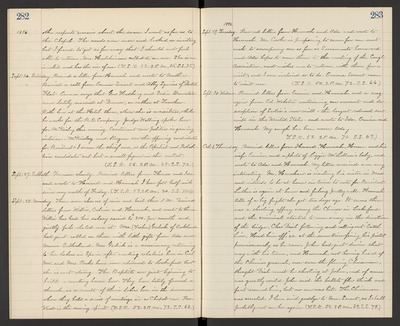 Sept. 26. Saturday. Received a letter from Hannah and wrote to Mother. Received a call from Emma Smart and Abby Squires of Dutch Flat. Emma says that Gres Hedburg and Sadie Brewster were lately married at Donner, or rather at Truckee. Both line at the Hotel there, where she is a waitress, while he works for the R.R.Company. Judge Walling spoke here for McKinley this evening. Excitement over politics is growing intense - McKinley and Bryan are the opposing candidates for President - I mean the chief ones, as the Populist and Prohibition candidates cut but a small figure in the contest. (T.S.R. 56. 2 P.M. 83. S.S. 72.)

Sept. 28. Monday. There were showers of rain and hail this P.M. Received letters from Willie, Calvin and Hannah, and wrote to them. Willie has had his salary raised to $200. per month and justly feels elated over it. Mrs. (Fisher) Gulick of Oakland had just called on them with little gifts from Ada and Mamie Sutherland. Mrs Gulick is a missionary returning to her labors in Spain after visiting relatives here in Cal Mr. and Mrs. Perks have now returned to Lockeford but she is not strong. The Baptists are just beginning to build a meeting house here. They have lately formed a church, as result of their labors here in the summer when they held a series of meetings in a Chapel car. Rev. Wood is the moving spirit. (T.S.R. 52. 2 P.M. 73. S.S. 68.)

1896. Sept. 29. Tuesday. Received letters from Hannah and Ada and wrote to Hannah. Mr. Cooke is Purposing to come for me next week to accompany me as far as Sacramento homeward and Ada hopes to come there to the meeting of the Congl Association. and wishes me to return with them for a visit, and I am inclined so to do. Emma Smart came to visit me. (T.S.R. 50. 2 P.M 72. S.S. 66)

Sept. 30. Wednes. Received letters from Eunice and Hannah and a magazine from Ed. Webster containing an account and description of Scotia's new mill - the largest redwood saw mill in the United States and wrote to Ida, Eunice and Hannah. My cough has been worse today. (T.S.R. 52. 2 P.M 74. S.S. 63)

Oct. 1. Thursday. Received letters from Howard, Hannah, Horace and his wife Eunice, and a photo of Lizzie McLellan's baby, and wrote to Ada and Hannah. My letters received were very interesting. Mr. Henshaw is visiting his sister in Mass. and intends to be at home in time to vote for President. Luther is again at home and feeling pretty well. Hannah tells of a big fright she got two days ago. It seems there was a shooting affray among the Chinese in Lockeford and the criminal started to run away in the direction of the bridge, Chas Dial following and calling out- "Catch him, Head him off", x.c. at the same time firing his pistol promiscuously as he ran. John had just driven that way with his team, and Hannah, not having heard of the Chinese quarrel, nor seen the fleeing Chinaman, thought Dial must be shooting at John, and of course was greatly excited. John said the bullets flow thick and fast around him, but no me was hit. The Chinaman was arrested. I have said goodbye to Mrs. Smart, as I shall Probably not see her again. (T.S.R. 54. 2 P.M 83. S.S. 79.)