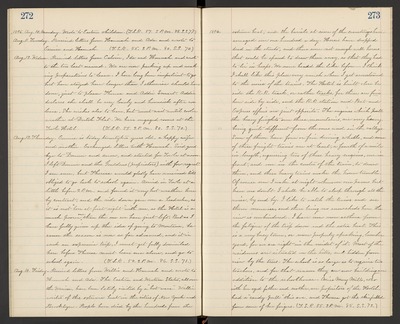 Aug. 12. Wednes. Received letters from Calvin, Ida and Hannah and wrote to the two last-named. We are now packing up and making preparations to leave. I have long been impatient to go but have stayed here longer than I otherwise should have done, just to please Theresa and Addie Smart. Addie declares she shall be very lonely and homesick after we leave. She wishes also to leave, but must wait until cooler weather at Dutch Flat. We have engaged rooms at the Towle Hotel. (T.S.R. 55. 2 P.M. 80. S.S. 70.)

Aug. 13. Thursday. Eunice is today twentytwo years old, a happy wife and mother. Exchanged letters with Hannah. Said goodbye to Donner and snow, and started for Towle at noon. I left Donner and the Gouldens (proprietors) with few regrets. I am sure, but Theresa would gladly have remained till obliged to go back to school again. Arrived in Towle at a little before 2 P.M. and found it very hot weather here by contrast, and the ride down gave me a headache, so it is not "love at first sight" with me, as the Hotel is a much poorer one than the one we have just left. But as I have fully given up the idea of going to Montana, because the season is now so far advanced, and it is such an expensive trip, I must get fully domiciled here before Theresa must leave me alone, and go to school again. (T.S.R. 50. 2 P.M. 86. S.S. 71.)

Aug. 14. Friday. Received letters from Willie and Hannah and wrote to Hannah and Ada. The Eastern and Western States, all over the Union, have been lately visited by a "hot wave". Willie writes of the extreme heat in the cities of New York and Brooklyn. People have died by the hundreds from the

1896. extreme heat, and the burials at some of the cemeteries have averaged over one hundred a day. Horses have dropped dead on the streets, and there were not enough well horses that could be spared to draw them away, so that they had to lie in heaps. We never heard the like before.- I think I shall like this place very much when I get accustomed to the noise of the trains. The Hotel is built close beside the R.R. track, or rather tracks, for there are five here side by side, and the R.R. station and Post and Express offices are just opposite. The engines which pull the heavy freights over these mountains, are very heavy, being quite different from the ones used in the valleys. Some of them have four or five driving wheels, and some of these freight trains are at least, a fourth of a mile in length, requiring two of these heavy engines, one in front, and one in the center of the train, to draw them, and these heavy trains make the house tremble. Of course now I wake at night whenever one passes but have no doubt. I shall be able to sleep through all the noise, by and by. I like to watch the trains and see them maneuver, and there being no snowsheds here, the view is unhindered. I have now more asthma from the fatigue of the trip down and the extra heat. This is very busy town, or more properly speaking, lumber yard, for we are right in the midst of it. Most of the residences are situated on the hills, and hidden from view by the trees. The school is so large as to require two teachers, and for that reason they are now building an addition to the school house. Miss Mary Mills, who with her aged father and mother, are proprietors of the Hotel, had a "candy-pull" this eve, and Theresa got the skin pulled from some of her fingers. (T.S.R. 55. 2 P.M. 85. S.S. 72.)