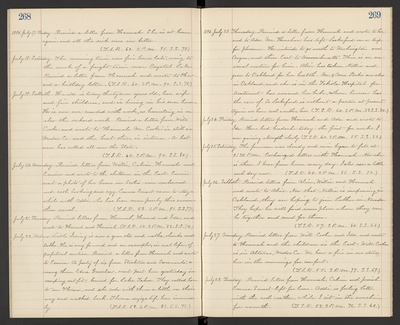 July 18. Saturday. The morning train was five hours late, owing to the wreck of a freight train near Crystal Lake. Received a letter from Hannah and wrote to Howard and a birthday letter. (T.S.R 60. 2 P.M. 92. S.S. 78.)

July 19. Sabbath. Howard is today thirty seven years old, has wife and five children, and is living in his own house. He is now over-crowded with work, as harvesting is on also the orchard work. Received a letter from Will Cooke and wrote to Hannah. Mr. Cooke is still in Modoc Co. and the heat there is intense. A hot wave has rolled all over the State. (T.S.R 60. 2 P.M. 94. S.S. 80.)

July 20. Monday. Received Letters from Willie, Calvin, Hannah and Eunice and wrote to the children in the East. Eunice sent a photo of her home in Scotia-vine-embowered and cool looking and cozy. Emma Smart came to stay a while with Addie, who has been more poorly this summer than usual. (T.S.R 58. 2 P.M. 91. S.S. 77.)

July 22. Wednes. Little Irving is now a year old and walks, climbs and talks. He is very forward and an example, in real life, of perpetual motion. Received a letter from Hannah and wrote to Eunice. A Party of six from Stockton and Sacramento, among them Edna Greenlaw, went past here yesterday in camping outfit, bound for lake Tahoe. They called here to see Theresa, and she rode with them a little on their way and walked back. Theresa enjoys life here immensely. (T.S.R 58. 2 P.M. 81. S.S. 71.)

1896. July 23. Thursday. Received a letter from Hannah and wrote to her and to Ada. Mr. Henshaw has left Lockeford on a trip for pleasure. He intends to go north to Washington and Oregon, and then East to Massachusetts. This an unusual venture for him. Alice has taken Nellie and gone to Oakland for her health. Mr. & Mrs. Perks are also in Oakland, and she is in the Fabiola Hospital for treatment, has weaned her babe, whom he now has the care of. So Lockeford is without a pastor at present. Again we have cool weather here. (T.S.R. 60. 2 P.M. 88. S.S. 80)

July 26. Sabbath. Received letters from Alice, Willie and Hannah and wrote to Alice. Now that Nellie is improving in Oakland, they are hoping to join Luther in Nevada. They hope he will find some place where they can be together and send for them. (T.S.R. 57. 2 P.M. 80. S.S. 68)