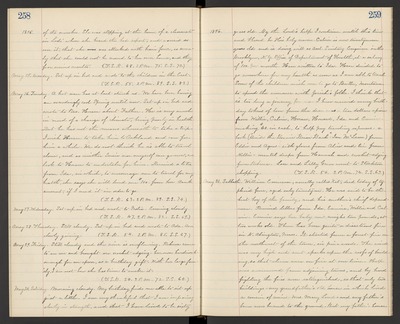 1896. of the number. She was stopping at the home of a classmate in Lodi when she heard the bad report, and worried so over it, that she was attacked with brain fever, so severely that she could not be moved to his own home, and they fear serious results. (T.S.R. 48. 2 P.M. 75. S.S. 70.)

May 26. Tuesday. A hot wave has at last struck us. We have been having an exceedingly cool Spring until now. Sat up in bed and wrote to Bro. Horace about Father. He is very much in need of a change of climate, being poorly in health. But he has not the means wherewith to take a trip. I wish Horace to take him to Oakland and care for him a while. We do not think he is able to travel alone, and as neither Susie nor myself can go now, we look to Horace to undertaken for him. Received a letter from Ida, in which, to encourage me to travel for my health, she says she will lend me $100. from her Bank account, if I need it in order to go. (T.S.R. 63. 2 P.M. 89. S.S. 74.)

May 30. Saturday. Morning cloudy. My birthday finds me able to sit up just a little. I am very thankful that I am improving slowly in strength, and that I have lived to be sixty

1896. years old. By the Lord's help I continue until this time and blessed be His holy name. Calvin is now twenty seven years old and is doing will as Asst. Sanitary Engineer in the Brooklyn, N.Y. Office of Department of Health, at a salary of $100. per month. Have written to Ida. Have decided to go somewhere for my health as soon as I am able to travel. Some of the children wish me to go to Butte, Montana, to spend the summer with Josiah's folks. I think that is too long a journey for me. I have received many birthday tokens of love from the dear ones - ten dollars a piece from Willie, Calvin, Horace, Howard, Ida and Eunice - making $60. in cash, to help pay traveling expenses - a book ("Beside the Bonnie Briar Bush" - I am McLaren) from Eddie and Agnes - silk gloves from Alice and tie from Nellie - mantel drape from Hannah and crochet edging from Rebecca. Lou and Lilly Greve went to Stockton shopping. (T.S.R. 56. 2 P.M. 74. S.S. 63.)

May 31. Sabbath. William Emerson, usually called Kit, died today of typhoid fever, aged only twenty one. He was said to be the best boy of the family, and his mother's chief dependence. Received letters from Ida, Eunice, Willie and Calvin. Eunice says her baby now weighs ten pounds, at two weeks old. There has been quite a disastrous fire in N. Abington, Mass. It started from a forest fire on the northwest of the town, in pine woods. The wind was very high and sent sparks upon the roofs of building, so that eleven were on fire at one time. Help was summoned from adjoining towns, and by hard fighting the fires were extinguished, so that only two buildings - my grandfather's old house in which lived a cousin of mine - Mrs. Mary Loud - and my father's barn were burned to the ground. But my father's house