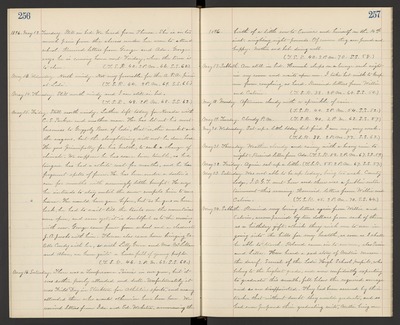 May 15. Friday. Still north windy. Luther left today for Nevada with C.S. Parker and another man. He has let out his meat business to Greggolz Bros. of Lodi, that is, the market and the wagons, but the slaughtering will not be done here. He goes principally for his health, to seek a change of climate. We suppose he has some liver trouble, as his tongue has had a white coat for months, and he has frequent spells of fever. He has been under a doctor's care for months with seemingly little benefit. He says he intends to stay until the snow compels him to come home. He would have gone before, but as he goes on horse back, he had to wait till the trails over the mountains were open, and even yet, it is doubtful as to the crossing with ease. George came home from school and a classmate J.O. Jacobs with him. Theresa also came home bringing Estelle Condy with her, so with Lilly Greve and Mrs. McLellan and Alice, we have quite a house full of young people. (T.S.R. 46. 2 P.M. 63. S.S. 60.)

May 16. There was a Temperance Picnic in our grove, but it was rather poorly attended and dull. Unfortunately it was Field Day in Stockton for Athletic sports, and many attended there who would otherwise have been here. We received letters from Ida and Ed. Webster, announcing the

May 24. Sabbath. Received very loving letters again from Willie and Calvin, accompanied by ten dollars from each of them as a birthday gift, which they wish me to use in going into the bills for my health, as soon as I shall be able to travel. Roland came in to see me, also Susie and Lilla. Have heard a sad story of Mellie Mason - the dwarf. Several of the Lodi High School pupils, who belong to the highest grade, and were confidently expecting to graduate this month, fill below the required average and so are disappointed. They had been assured by their teacher that without doubt they would graduate, and is had even prepared their graduating suits, Mellie being one