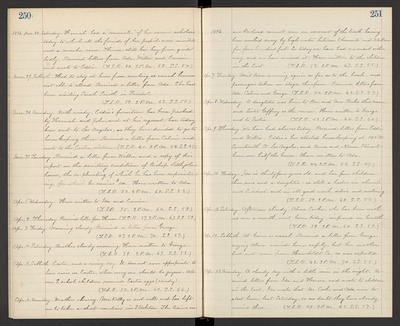 Mar. 30. Monday. North windy. Eddie's furniture has been packed by Hannah and John, and at his request has today been sent to Los Angeles, as they have decided to go to housekeeping there. Received a letter from Calvin and wrote to the Eastern children. (T.S.R. 40. 2 P.M. 54. S.S. 47.)

Apr. 6. Monday. Weather showery. Mrs.Kelly is not well and has left us to take a short vacation in Stockton. The trains on

1896. our Railroad cannot run on account of the track having been washed away by high water between Clements and Wallace for four hundred feet. So today we have had no mail either way, and we have missed it. Have written to the children in the East. (T.S.R. 52. 2 P.M. 67. S.S. 55.)

Apr. 13. Monday. A cloudy day with a little rain in the night. Received letters from Ida and Horace, and wrote to children in the East. Ida wrote that Mr. Cooke and Ada were to start home last Saturday, so no doubt they have already arrived there. (T.S.R. 48. 2 P.M. 62. S.S. 57.)