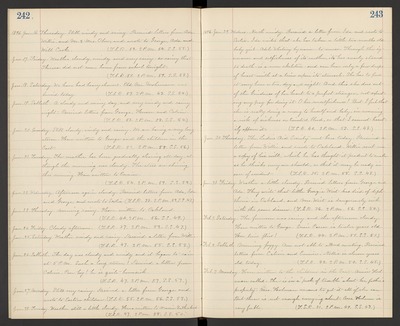 1896. Jan. 29. Wednes. North windy. Received a letter from Ida and wrote to Scotia. Ida writes that she has taken a little two-months old baby girl - Adele Whitney by name - to nurse. Through the ignorance and selfishness of its mother, it has nearly starved to death - is a mere skeleton - and can bear only a few drops of breast milk at a time upon its stomach. She has to feed it every hour or two, day and night. And this she does out of the kindness of her heart to a perfect stranger, not expecting any pay for doing it. O her unselfishness! But I feel that she is really doing a wrong to herself and baby, in running a risk of sickness or tainted blood, so that I cannot heartily approve it. (T.S.R. 40. 2 P.M. 53. S.S. 48.)

Jan. 30. Thursday. The Ladies Aid Society met here today. Received a letter from Willie and wrote to Oakland. Willie sent me a copy of his will, which he has thought it prudent to make as he thinks every one should, so that it may be ready in case of accident. (T.S.R. 35. 2 P.M. 55. S.S. 48.)

Jan. 31. Friday. Weather a little cloudy. Received letters from George and Ada. They write that little Georgie Wirt had died of diphtheria in Oakland, and Mrs. Wirt is dangerously sick with same disease. (T.S.R. 36. 2 P.M. 56. S.S. 50.)