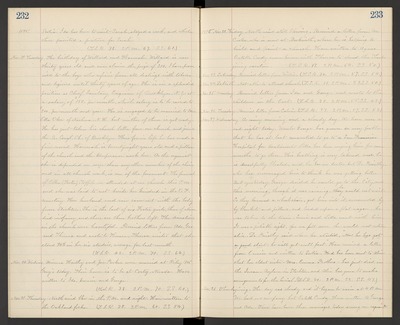 Nov. 19. Tuesday. The birthday of Willard and Hannah. Willard is now thirty years old and can claim the prize of $300. I have promised to the boys who refrain from all dealings with tobacco and liquors until thirty years of age. He is in a splendid position as Chief Sanitary Engineer of Brooklyn, N.Y. at a salary of $150. per month, which salary is to be raised to $200. per month next year. He is engaged to be married to Miss Etta Ober of Nashua, N.H. but neither of them is yet ready. He has just taken his church letter from our church and joined the So. Congl. Ch. of Brooklyn. Thus far in life he has made a fine record. Hannah is twenty eight years old and a pillar of the church and the temperance work here. As the organist she is depended on more than any other member of the choir and in all church work, is one of the foremost. The funeral of Ellen (Foster) Stoffels was attended at our church this P.M. and she was laid to rest beside her kindred in the O.F. cemetery. Her husband and son came out with the body from Stockton. She is the last of six Foster girls, three of whom died infancy, and there are three brothers left. The decorations in the church were beautiful. Received letters from Ada, Geo. and Theresa and wrote to Horace. Theresa writes that she stood 94% in her six studies, average for the last month. (T.S.R. 43 2 P.M. 70. S.S. 64.)

Nov. 27. Wednesday. A rainy morning and a cloudy day. We have seen a sad sight today. Uncle George has grown so very feeble that he has at last consented to go to a San Francisco Hospital for treatment. Lilla has been urging him for some months to go there. His breathing is very labored and he is dreadfully bloated, and he has no doctor but Dr. Priestley, who has encouraged him to think he was getting better. But yesterday, George decided he would go to the City, and this morning, though it was raining, he would not wait. So they borrowed a wheel-chair, got him into it, surrounded by by blankets and pillows, and loaded upon a flat wagon, he was taken to the train. Susie and Lilla went with him. It was a pitiable sight, for we felt sure he would not return alive. Dr. Priestley said when he started, "Now he has got a good start, he will get well fast." Have received a letter from Eunice and written to Scotia. Word has been sent to Alice that her eldest sister - Mrs. Emma Prothero - has just died in the Insane Asylum in Stockton, and Alice has gone to make arrangement for the burial. (T.S.R. 40. 2 P.M. 52. S.S. 47.)

Nov. 28. Thanksgiving. The day was cloudy and it began to rain at 4 P.M. We had no company but Estelle Condy. Have written to George and Ada. There have been three marriages today among our acquintances.