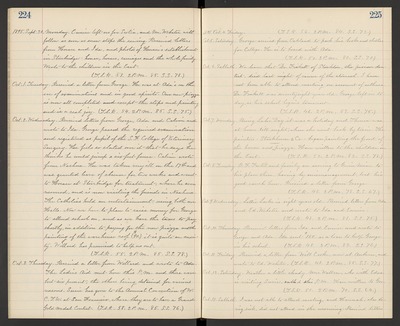 1895. Sept. 30. Monday. Eunice left us for Scotia, and Mr. Webster will follow as soon as snow stops the sawing. Received letters from Horace and Ida, and photos of Horace's establishment in Sturbridge - house, horses, carriages and the whole family. Wrote to the children in the East. (T.S.R. 53. 2 P.M. 85. S.S. 78.)

Oct. 2. Wednesday. Received letters from George, Ada and Calvin and wrote to Ida. George passed the required examination and registered as pupil of the S.F. College of Veterinary Surgery. He feels so elated over it that he says he thinks he could jump a six-feet fence. Calvin wrote from Nashua. He was taken very ill on the 17th and was granted leave of absence for two weeks and went to Horace at Sturbridge for treatment, where he soon recovered, and is now visiting the friends in Nashua. The Catholics held an entertainment, using both our Halls. Now we have to plan to raise money for George to attend school on, and as we have the taxes to pay shortly, in addition to paying for the new piazza and the painting of the warehouse roof ($90.) it is quite an anxiety. Willard has promised to help us out. (T.S.R. 55. 2 P.M. 85. S.S. 78.)

Oct. 3. Thursday. Received a letter from Willard and wrote to Ada. The Ladies Aid met here this P.M. and there were but six present, the others being detained for various reasons. Susie has gone to the Annual Convention of W.C.T.U. at San Francisco, where they are to have a Grand Gold Medal Contest. (T.S.R. 58. 2 P.M. 85. S.S. 76.)

Oct. 6. Sabbath. We learn that Dr. Fickett of Stockton, the pioneer dentist, died last night of cancer of the stomach. I have not been able to attend meeting on account of asthma. Dr. Fickett was seventyeight years old. George left us today, as his school begins tomorrow. (T.S.R. 46. 2 P.M. 83. S.S. 75.)

Oct. 13. Sabbath. I was not able to attend meeting, and Hannah, also being sick, did not attend in the morning. Received letters