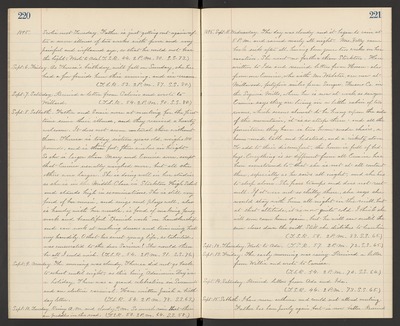 Sept. 8. Sabbath. Father and Susie were at meeting for the first time since their illness, and they received a hearty welcome. It does not seem natural there without them. Theresa is today sixteen years old, weighs 110 pounds, and is five feet, three inches in height. So she is larger than Mary and Eunice were, except that Eunice usually weighed more, but all the others were larger. She is doing well in her studies as she is in the Middle Class in Stockton High School and stands high in examinations. She is still very fond of her music, and sings and plays well, also is handy with her needle, is fond of making fancy work and beautiful "Spanish work" on handkerchiefs, and can work at making dresses and trimming hats very handily. O that her sweet young life, so talented, was consecrated to the dear Saviour! She would then be all I could wish. (T.S.R. 54. 2 P.M. 91. S.S. 76.)

Sept. 9. Monday. The morning was cloudy. Theresa did not go back to school until night, as this being "Admission Day" was a holiday. There was a grand celebration in Sacramento and an electric carnival. Have written Josiah a birthday letter. (T.S.R. 54. 2 P.M. 78. S.S. 63.)

1895. Sept. 11. Wednesday. The day was cloudy and it began to rain at 5 P.M. and rained nearly all night. Mrs. Kelly came back sick after all, having gone two weeks on her vacation. She went no farther than Stockton. Have written to Ida and received letters from Horace - also from our Eunice, who with Mr. Webster, are now at Millwood, fortyfive miles from Sanger, Fresno Co. in the Sequoia Mills, where he is now at work as sawyer. Eunice says they are living in a little cabin of two rooms, which seems almost to be hung upon the side of the mountain, it is so steep there - and all the furniture they have is two home-made chairs, a home-made table and bedstead, and a rickety stove. To add to their discomfort, the house is full of bedbugs. Everything is so different from all Eunice has been accustomed to, that she is not at all content there, especially as he saws all night, and she has to sleep alone. She fears tramps and does not rest well. If it were not so chilly there, she says she would stay with him all night in the mill, but at that altitude, it is now quite cold. I think she will soon come home again, but he will saw until the snow closes down the mill. Still she dislikes to leave him. (T.S.R. 58. 2 P.M. 83. S.S. 65.)

Sept. 15. Sabbath. I have more asthma and could not attend meeting. Father has been poorly again, but is now better. Received