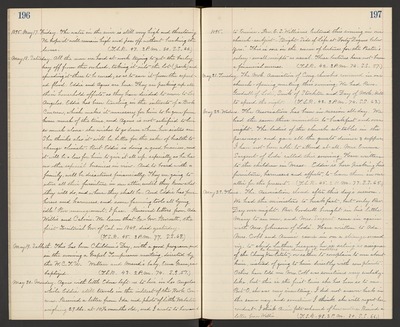 May 18. Saturday. All the men are hard at work trying to get the barley hay off from the orchard, taking it into the lot (park) and spreading it there to be cured, so as to save it from the expected flood. Eddie and Agnes are here. They are packing up all their household effects, as they have decided to move to Los Angeles. Eddie has been traveling in the interests of a Book Concern, which makes it necessary for him to be gone from home much of the time, and Agnes is not satisfied to live so much alone - she wished to go down where her sisters are. She thinks also it will be better for the sake of health to change climate. But Eddie is doing a good business, and it will be a loss for him to five it all up, especially as he has no other especial business in view. And to board with a family, will be disastrous financially. They are going to store all their furniture in our attic, until they know what they will do, and where they shall be. And Eddie has four horses and harnesses, and some farming tools all lying idle! Poor management, I fear. Received letters from Ada, Willie and Calvin. We learn that Ex.-Gov. Burnett, the first Territorial Gov. of Cal. in 1849, died yesterday. (T.S.R. 45. 2 P.M. 77. S.S. 63.)

May 20. Monday. Agnes with little Edna left us to live in Los Angeles, while Eddie still travels in the interest of the Book Concern. Received a letter from Ida and photo of little Webster weighing 29 lbs. at 10 1/2 months old, and I wrote to her and

1895. to Eunice. Rev. E.S.Williams lectured this evening in our church-subject - "Bright Side of Life at Forty Degrees below Zero." This is one in the course of lectures for the Pastor's salary - small receipts as usual. These lectures have not been a financial success. (T.S.R. 42. 2 P.M. 74. S.S. 57.)

May 22. Wednes. The Association has been in session all day. We had the same three minister to breakfast and overnight. The ladies of the church set tables in the parsonage and gave all the guests dinner & supper. I have not been to attend at all. Mrs. Emma Sargent of Lodi called this evening. Have written to the children in Mass. Eddie is here packing his furniture, harnesses and effects, to leave them in our attic for the present. (T.S.R. 45. 2 P.M. 77. S.S. 65.)

May 23. Thurs. The Association closed after this day's session. We had the ministers to breakfast, but only Rev. Day over night. Rev. Goodsell brought in his little Mary to see me, and Mrs. Sargent came in again with Mrs. Johnson of Lodi. Have written to Ada. Mrs. Cobb and Annie came in on a strange errand. viz. to hide Luther because he is acting as assignee of the Chung Kee Estate he having been chosen by the creditors - or rather to complain to me about him, instead of going to him directly with complaints. Others have told me Mrs. Cobb was sometimes very unlady-like, but this is the first time she has been so to me. But O, she was very insulting. I did not answer back in the same way, and sometime I think she will regret her conduct. I think Annie felt ashamed of her mother. Received a letter from Willie. (T.S.R. 48. 2 P.M. 80. S.S. 66.)