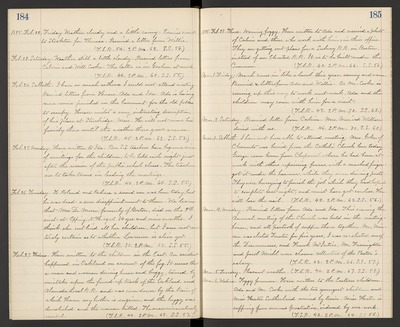 Feb. 24. Sabbath. I have so much asthma I could not attend meeting. Received letters from Horace, Ada and Ida. Ada is having more rooms finished in the basement for the old folks to occupy. Horace writes a very interesting description of his place at Sturbridge, Mass. He will not move his family there until the weather there grows warmer. (T.S.R. 45. 2 P.M. 62. S.S. 52.)

Feb. 25. Monday. Have written to Ida. Our S.S. teachers have begun a series of meetings for the children, to be held each night just after the session of the public school closes. The teachers are to take turns in leading the meetings. (T.S.R. 40. 2 P.M. 60. S.S. 55.)

Feb. 27. Wednes. Have written to the children in the East. An accident happened in Oakland on account of the fog. It seems that a man and woman driving horse and buggy, turned by mistake upon the fenced- up track of the Oakland and Alameda Local R.R. and was run down by the train of which Horace my brother is engineer, and the buggy was demolished and the woman killed. The man miraculously escaped. (T.S.R. 40. 2 P.M. 68. S.S. 57.)

Mar. 3. Sabbath. I have not been able to attend meeting. Mrs. Goke of Clements was buried from the Catholic Church here today. George came home from Chaparial where he had been at work with others repairing fences, with a mashed finger - got it under the hammer, while they were driving posts. They were hurrying to finish the job which they had hoped to complete last night, and must have got careless. He will lose the nail. (T.S.R. 42. 2 P.M. 62. S.S. 56.)

Mar. 4. Monday. Received letters from Ada and Ida. This evening the Annual meeting of the Church was held in the meeting-house, and all partook of supper there together. Mr. Minner was elected Trustee for five years, I was re-elected one of the Deaconnesses, and Frank McIntire, Mr. Farrington and Jacob Michl were chosen collectors of the Pastor's salary. (T.S.R. 42. 2 P.M. 66. S.S. 57.)