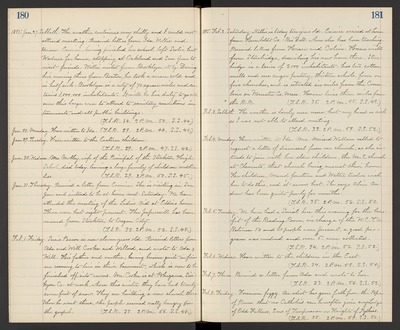 1895. Jan. 27. Sabbath. The weather continues very chilly and I could not attend meeting. Received letter from Ida, Willie and Horace. Eunice, having finished her school, left Scotia last Wednes. for home, stopping at Oakland and San Jose to visit friends. Willie writes from Brooklyn, N.Y. During his moving there from Boston, he took a severe cold and is half sick. Brooklyn is a city of 70 square miles and contains 1,000,000 inhabitants. It will be his duty to go all over this large area to attend to sanitary conditions in tenements, and all public buildings. (T.S.R. 34. 2 P.M. 50. S.S. 44.)

Jan. 31. Thursday. Received a letter from Eunice. She is visiting in San Jose and intends to be at home next Saturday. We have attended the meeting of the Ladies Aid at Eddie's house. There were but eight present. The papermill has been moved from Stockton to Oregon City. (T.S.R. 32. 2 P.M. 52. S.S. 48.)

Feb. 1. Friday. Susie Pascoe is now eleven years old. Received letters from Ada and Will Cooke and Willard, and wrote to Ada & Will. His father and mother, having become quite in firm are coming to live in their basement, which is now to be finished off site rooms. Mr. Cooke is at Pokegama, Sisikyou Co. at work, where this winter they have had twenty-seven feet of snow. They are building a new church there. When he went there, the people seemed really hungry for the gospel. (T.S.R. 37. 2 P.M. 56. S.S. 48.)

1895. Feb. 2 Saturday. Nellie is today ten years old. Eunice arrived at home from Humboldt Co. - Rio Dell - where she has been teaching. Received letters from Horace and Calvin. Horace writes from Sturbridge, describing his new home there. Sturbridge is a town of 2000 inhabitants - has two cotton mills and one auger factory, thirteen schools, four or five churches, and is situated six miles from the Conn. line in Worcester Co. Mass. Horace lives three miles from the R.R. (T.S.R. 35. 2 P.M. 55. S.S. 49.)

Feb. 4. Monday. Have written to Ida. Mrs. Minard Wallace called to request a letter of dismissal from our church, as she intends to join with her elder children, the M.E. church at Clements, that church being nearest their home. Her children, Mand fourteen and Walter twelve wish her to do this, and it seems best. She says Alice Andrew has been quite poorly for months. (T.S.R. 35. 2 P.M. 56. S.S. 50.)