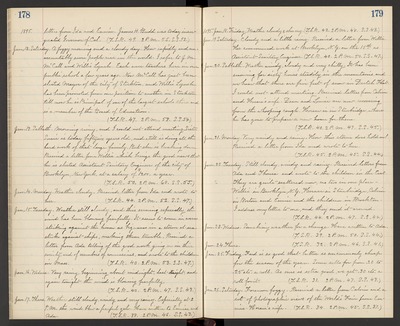 Jan. 12. Saturday. A foggy morning and a cloudy day. How rapidly and unaccountably some people rise in the world. I refer to J.M. McCall and Willis Lynch. Each were teachers her in our public school a few years ago. Now McCall has just been elected Mayor of the city of Stockton, and Willis Lynch has been promoted from one position to another in Stockton, till now he is Principal of one the largest schools there and is a member of the Board of Education. (T.S.R. 47. 2 P.M. 53. S.S. 54.)

Jan. 13. Sabbath. Morning rainy, and I could not attend. Sister Susie is today fiftysix years old, and still is doing all the hard work of that large family. But she is breaking down. Received a letter from Willie which brings the good news that he is elected Assistant Sanitary Engineer of the city of Brooklyn, New York, at a salary of $1200. a year. (T.S.R. 50. 2 P.M. 60. S.S. 55.)

Jan. 15. Tuesday. Weather still cloudy, and this evening especially the wind has been blowing fearfully. It seems to come in waves striking against the house as big waves in a storm at sea strike against ships, making them tremble. Received a letter from Ada telling of the good work going one in their society, and of numbers of conversions, and wrote to the children in Mass. (T.S.R. 40. 2 P.M. 53. S.S. 47.)

Jan. 20. Sabbath. Weather windy, cloudy and very chilly. It has been snowing for sixty hours steadily in the mountains and we hear that there are five feet of snow in Dutch Flat. I could not attend meeting. Received letters from Calvin and Horace's wife. Dean and Louise are now recovering from the whooping cough. Horace is in Sturbridge, where he has gone to prepare a new home for them. (T.S.R. 40. 2 P.M. 47. S.S. 45.)

Jan. 22. Tuesday. Still cloudy, windy and rainy. Received letters from Ada and Theresa and wrote to the children in the East. They are quite scattered now, no two in one place - Wille in Brooklyn, N.Y., Horace in Sturbridge, Calvin in Boston and Eunice and the children in Brockton. I address my letter to me, and they send it around. (T.S.R. 44. 2 P.M. 47. S.S. 44.)