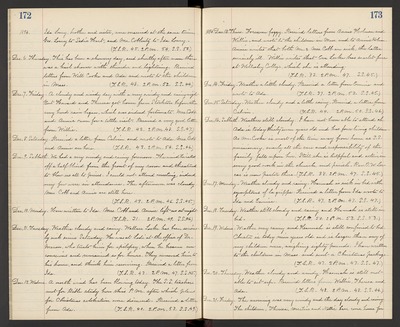 Dec. 6. Thursday. This has been a showery day, and shortly after noon there was a hail shower with thunder and lightning. Received letters from Will Cooke and Ada and wrote to the children in Mass. (T.S.R. 48. 2 P.M. 52. S.S. 44.)

Dec. 7. Friday. A cloudy and windy day with a very windy and rainy night. But Howard and Theresa got home from Stockton before the very hard rain began, which was indeed fortunate. Mrs. Cobb and Annie came for a little visit. Received a very good letter from Willie. (T.S.R. 42. 2 P.M. 48. S.S. 47.)

Dec. 9. Sabbath. We had a very windy and rainy forenoon. The wind twisted off a half-blind from the front of any room and threatened to blow no all to pieces. I could not attend meeting, indeed very few were in attendance. The afternoon was cloudy. Mrs. Cobb and Annie are still here. (T.S.R. 43. 2 P.M. 46. S.S. 45.)

Dec. 11. Tuesday. Weather cloudy and rainy. Wallace Locke has been seriously sick since Saturday. He was at Lodi at the office of Dr. Mason, who treats him for epilepsy, when he became unconscious and remained so for hours. They removed him to his home, and think him recovering. Received a letter from Ida. (T.S.R. 43. 2 P.M. 47. S.S. 45.)

1894. Dec 13. Thurs. Forenoon foggy. Received letters from Annie Holman and Willie, and wrote to the children in Mass. and to Annie Holman. Annie writes that both Mr. & Mrs. Cobb are sick, the latter seriously ill. Willie writes that Eva Locke has scarlet fever at Wellesley College, which she is attending. (T.S.R. 33. 2 P.M. 47. S.S. 45.)

Dec. 16. Sabbath. Weather still cloudy. I have not been able to attend ch. Ada is today thirty seven years old and has four living children. As Mr. Cooke is most of the time away from home as S.S. missionary, nearly all the care and responsibility of the family falls upon her. Still she is helpful and active in every good work in the church and parish. Rev. O.W. Lucas is now pastor there. (T.S.R. 38. 2 P.M. 47. S.S. 45.)

Dec. 19. Wednes. Weather very rainy and Hannah is still confined to bed. Chester is today nine years old and is larger than any of my children were, weighing eighty pounds. I have written to the children in Mass. and sent a Christmas package. (T.S.R. 47. 2 P.M. 47. S.S. 47.)

Dec. 21. Friday. The morning was very windy and the day cloudy and rainy. The children, Theresa, Mertise and Nettie have come home for