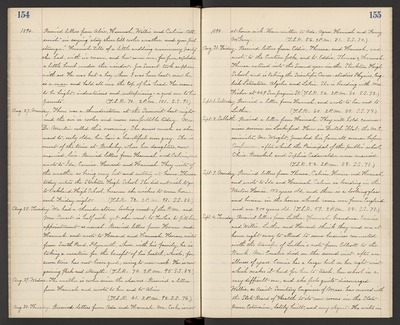 1894. Received letters from Alice, Hannah, Willie and Calvin. All unite in saying "stay there till cooler weather and you feel stronger". Hannah tells of a little wedding anniversary party she had, with ice cream, and how someone, for fun, exploded a little bomb under the window. Joe Smart took supper with us. He was but a boy when I was here last, now he is a man and bald all over the top of his head. He seems to be bright, industrious and enterprising - a good son to his parents. (T.S.R. 70. 2 P.M. 101. S.S. 91.)

Aug. 27. Monday. There was a thunder storm at the Summit last night and the air is cooler and more comfortable today. Mrs. Dr. Martin called this morning. She seems much as she used to, only older, her hair is beautiful iron gray. She is most of the time at Berkeley, where her daughters, now married, live. Received letters from Hannah and Calvin, and wrote to Ida, Eunice, Howard and Hannah. They write of the weather as being very hot and sultry at home. Theresa today enters the Stockton High School. She did not wish to go to Oakland High School, because she wishes to come home each Friday night. (T.S.R. 72. 2 P.M. 98. S.S. 88.)

Aug. 28. Tuesday. We had a thunder storm, lasting most of the P.M. and Mrs. Smart is half sick, yet she went to Towle's, to fill her appointment as usual. Received letters from Horace and Hannah and wrote to Howard and Hannah. Horace writes from South Pond, Plymouth, where, with his family, he is taking a vacation for the benefit of his health, which, for some time has not been good, owing to over work. He is now gaining flesh and strength. (T.S.R. 70. 2 P.M. 95. S.S. 83.)

Aug. 31. Friday. Received letters from Eddie, Theresa and Hannah, and wrote to the Eastern folks, and to Eddie, Theresa & Hannah. Theresa entered into the Second year in the Stockton High School, and is taking the Scientific Course - studies Physics, English Literature, Algebra and Latin. She is boarding with Mrs. Fisher at 469 San Joaquin St. (T.S.R. 56. 2 P.M. 80. S.S. 72.)

Sept. 2. Sabbath. Received a letter from Hannah. They will hold communion service in Lockeford. Here in Dutch Flat, the M.E. minister, Mr. Wright, preached his farewell sermon before Conference, after which the Principal of the public school Chris. Runckel and Sophia Cadawalder were married. (T.S.R. 52. 2 P.M. 83. S.S. 78.)

Sept. 4. Tuesday. Received letters from Luther, Hannah, Grandma, Eunice and Willie. Luther and Howard think they need me at home right away to attend to some business connected with the transfer of Luther's not from Elliot to the Bank. Mr. Emslie died on the second inst. after an illnes of years. Eunice has a large boil on her right wrist which makes it hard for her to teach, her school is a very difficult one, and she feels quite discouraged. Willie, as Assist. Sanitary Engineer of Mass, has moved with the State Board of Health to its new rooms in the State House Extension, lately built, and very elegant. Have writes in