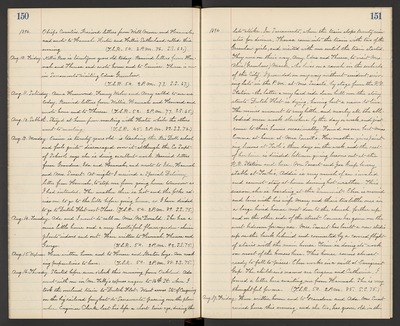 Aug. 13. Monday. Eunice is twenty years old - is teaching the Rio Dell school and feels quite discouraged over it although the Co. Supt. of Schools says she is doing excellent work. Received letters from Grandma, Ida and Hannah, and wrote to Ida, Hannah and Mrs. Smart. At night I received a Special Delivery letter from Hannah, to stop me from going home tomorrow as I had intended. The weather there is hot and the folks advise me to go to the hills before going home, so I have decided to go to Dutch Flat next Thurs. (T.S.R. 54. 2 P.M. 89. S.S. 75.)

Aug. 16. Thursday. Started before seven o'clock this morning from Oakland. Ada went with me in Mr. Tally's express wagon to 16th St. where I took the overland train to Dutch Flat. Went across St. of Carquinez on the big railroad ferry boat to Sacramento, passing over the place where Engineer Clarke lost his life a short time ago, during the

1894 late strike. In Sacramento, where the train stops twenty minutes for dinner, Theresa came into the train with two of the Greenlaw girls, and visited with me until the train started. They were on their way, Amy, Edna and Theresa, to visit Mrs. Alice (Greenlaw) Mack, who lives on a ranch in the suburbs of the City. I proceeded on my way without accident, arriving late in the P.M. at Mrs. Smart's, by stage from the R.R. Station - the latter a every hard ride down hill over the stony streets. Dutch Flat is dying, having but a name to live. The mines amount to very little, and nearly all the able - bodied men work else where by the day or week, and just come to their homes occasionally. Found on one but Miss Emma at home at Mrs. Smart's. Her mother gives pointing lessons at Towle's three days in the week, and the rest of her time is divided between giving lessons out at the R.R. Station and here. Mr. Smart and Joe keep livery stable at Towle's, Addie is very much of an invalid and cannot stay at home during hot weather. This season, she is boarding at the Summit. Eben is married and lives with his wife Mary and their little ones in a large hired house next door to the church farther up and on the other side of the street. Emma has given me the west bedroom for my use. Mrs. Smart has built a new studio up on the bank behind and connected by a covered flight of stairs with the main house. Time is doing its work on most of the houses here. This house seems almost ready to fall to pieces. Eben works in a mill at Emigrant Gap. The children's names are Eugene and Catherine. I found a letter here awaiting me from Hannah. She is very thoughtful for me. (T.S.R. 50. 2 P.M. 85. S.S. 75.)

Aug. 17. Friday. Have written home and to Grandma and Ada. Mrs. Smart arrived home this evening, and she too, has grown old in the