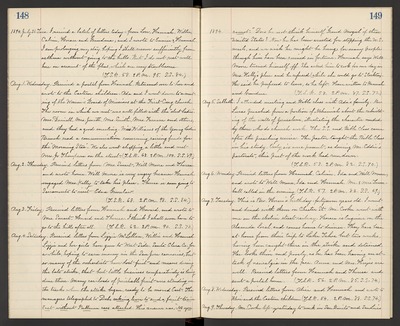 1894. July 31. Tues. I received a batch of letters today - from Lou, Hannah, Willie, Calvin, Horace and Grandma, and I wrote to Eunice & Hannah. I am prolonging my stay, hoping I shall recover sufficiently from asthma without going to the hills. But I do not rest well here on account of the fleas, which are very troublesome. (T.S.R. 58. 2 P.M. 95. S.S. 84.)

Aug. 1. Wednesday. Received a postal from Hannah. Returned one to her and wrote to the Eastern children. Ada and I went down to a meeting of the Woman's Board of Missions at the First Cong. church. The room in which we met was well filled with the "elect ladies". Mrs. Dwinell, Mrs. Jewett, Mrs. Smith, Mrs. Farnam and others, and they had a good meeting. Miss. Williams of the Young Ladies Branch read a communication concerning raising funds for the "Morning Star". We also went shopping a little and met Mrs. Jo Thompson on the street. (T.S.R. 68. 2 P.M. 100. S.S. 89.)

Aug. 4. Saturday. Received letters from Lizzie McLellan, Willie and Hannah. Lizzie and her girls have gone to West Side, Santa Clara Co. for a while, hoping to earn money in the San Jose canneries, but so many of the orchardists have los fruit and means during the late strike, that but little business comparatively is being doe there. Many car-loads of perishable fruit were standing on the tracks when the strike began, ready to be moved East. The managers telegraphed to Debs asking leave to send a fruit train East without Pullman cars attached. His answer was, "No you

1894. cannot." Does he not think himself "Grand Mogul" of these United States? Now he has been arrested for stopping the W.S. mails, and we wish he might be hung. for many people through him have been ruined in fortune. Hanna says Will Moore turned himself off. She asked him to cook for one day in Mrs. Kelly's place and he refused (while she could go to Stockton). He said he preferred to leave, so he left. Have written to Hannah and Grandma. (T.S.R. 58. 2 P.M. 87. S.S. 72.)

Aug. 5. Sabbath. I attended meeting and Bible class with Ada's family. Rev. Lucas preached from a portion of Nehemiah about the rebuilding of the walls of Jerusalem, illustrating the character needed by those who do church work. The S.S. and Bible Class came after the preaching service. The pastor taught the Bible Class in his study. Only six were present, as during Mr. Eddie's pastorate, this part of the work had run down. (T.S.R. 53. 2 P.M. 82. S.S. 70.)

Aug. 7. Tuesday. This is Bro. Horace's birthday - fortyseven years old. I went and dined with them on Chester St. Mr. Cooke went with me on the electric street railway. Horace is Engineer on the Alameda Local, and comes home to dinner. They have been at home from their trip to Lake Tahoe but two weeks, having been caught there in the strike and detained. He looks thin and poorly, as he has been having an attack of neuralgia in the face. Anna and Mrs. Haye's are well. Received letters from Hannah and Theresa and sent a postal home. (T.S.R. 56. 2 P.M. 85. S.S. 74.)