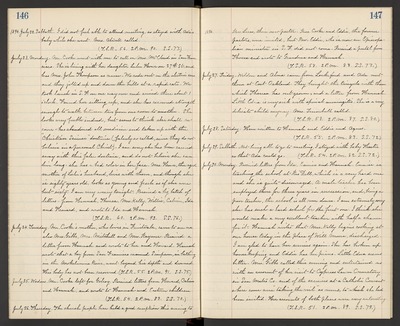 July 23. Monday. Mr. Cooke went with me to call on Mrs. McCloud in San Francisco. She is living with her daughter Lulu Howe on 27th St, and has Mrs. John Thompson as nurse. We rode out on the electric cars and they jolted up and down the hills at a rapid rate. We took lunch in S.F. on our way over and arrived there about 1 o'clock. Found her sitting up, and she has recovered strength enough to walk between two from one room to another. She looks very feeble indeed, but seems to think she shall recover - has abandoned all medicine and taken up with the "Christian Science" doctrine (falsely so called, since they do not believe in a personal Christ). I am sorry she has been carried away with this false doctrine, and do not believe she can live long - she has a bad color in her face. Mrs. Howe, the aged mother of Lulu's husband, lives with them, and though she is eighty years old, looks as young and fresh as if she were but sixty. I am very weary tonight. Received a big batch of letter - from Hannah, Theresa, Mrs. Kelly, Willie, Calvin, Ida and Howard, and wrote to Ida and Hannah. (T.S.R. 60. 2 P.M. 93. S.S. 76.)

July 24. Tuesday. Mr. Cooke's mother, who lives in Fruitvale, came to see us also Mrs. Gibbs, Mrs. Mitchell and Mrs. Raymes. Received a letter from Hannah and wrote to her and Howard. Hannah wrote that a boy from San Francisco named Simpson, in bathing in the Mokelumne River, went beyond his depth and drowned. His body has not been recovered. (T.S.R. 55. 2 P.M. 91. S.S. 75.)

July 26.Thursday. The church people here held a good reception this evening to

July 27. Friday. Weldon and Alma came from Lockeford and Ada met them at East Oakland. They Brought the tricycle with them which Theresa has out grown, and a letter from Hannah. Little Edna is very sick with spinal meningitis. She is a very delicate child anyway. Mrs. Trumbull called. (T.S.R. 58. 2 P.M. 87. S.S. 80.)

July 30. Monday. Received letters from Ida, Eunice and Hannah. Eunice is teaching the school at Rio Dell, which is a very hard one and she is quite discouraged. A male teacher has been employed there for three years in succession, and, being a poor teacher, the school is all run down. I am extremely sorry she has such a hard school for the first one. I think she would make a very excellent teacher with half a chance for it. Hannah writes that Mrs. Kelly begins cooking at our house today, in the place of Will Moore, discharged. I am glad to have her services again. she has broken up house keeping and Eddie has her piano. Little Edna seems better. Mrs. Gibbs called this evening and entertained us with an account of her visit to Cypress Lawn Crematory in San Mateo Co. and the exercises at a Catholic Convent where some were "taking the veil" as nuns, to which she had been invited. Her accounts of both places were very interesting. (T.S.R. 51. 2 P.M. 89. S.S. 79.)