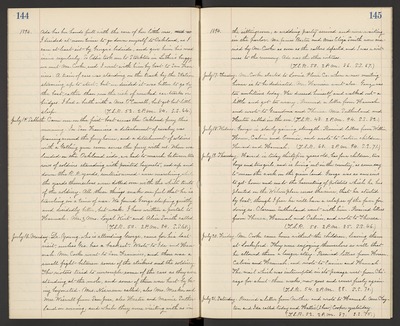 1894. Ada has her hands full with the care of her little ones, I decided at noon time to go down myself to Oakland, as I can at least sit by George's bedside, and give him his medicine regularly. So Eddie took me to Stockton in Luther's buggy, we met Mr. Cooke, and I went with him by boat to San Francisco. A train of cars was standing on the track by the Station steaming up to start, but we decided it was better to go by the boat, rather than run the risk of wrecked car-tracks or bridges. I had a berth with a Mrs. O'Connell, but got but little sleep. (T.S.R. 52. 2 P.M. 84. S.S. 64.)

July 15. Sabbath. Came over on the first boat across the Oakland ferry this morning. In San Francisco a detachment of cavalry was prancing around the ferry house, and a detachment of soldiers with a Gatling gun came across the ferry with us. When we landed on the Oakland side, we had to march between two rows of soldiers standing with pointed bayonets, and up and down the R.R. yards, sentries-armed - were marching, while the yards themselves were dotted over with the white tents of the soldiery. All these things make me feel that he is traveling in a time of war. We found George sleeping quietly and decidedly better, but weak. I have written a postal to Hannah. Mr. & Mrs. Loyal Wirt and Alice Smith called. (T.S.R. 50. 2 P.M. 84. S.S. 68.)

July 16. Monday. Dr. Young, who is attending George, came for his last visit, unless Geo, has a backset. Wrote to Ida and Hannah. Mr. Cooke went to San Francisco, and there was a small fight between some of the strikers and the soldiery. The rioters tried to uncouple some of the cars as they were standing at the mole, and some of them were hurt by being bayoneted. Mrs. Niemann called, also Mrs. Meeker and Mrs. Wiswell from San Jose, also Hester and Mamie Sutherland in evening, and while they were visiting with us in

1894. the sittingroom, a wedding party arrived and were waiting in the parlor. Mr. James Baxter and Miss Eliza Smith were married by Mr. Cooke as soon as the callers departed, and I was a witness to the ceremony. Ada was the other witness. (T.S.R. 50. 2 P.M. 86. S.S. 67.)

July 17. Tuesday. Mr. Cooke started to Loomis, Placer Co. where a new meeting. house is to be dedicated. Mr. Harrison went also. George was too ambitions today. He dressed himself and walked out a little and got too weary. Received a letter from Hannah and wrote to Grandma and Theresa. Mrs. Sutherland and Hester called in the eve. (T.S.R. 48. 2 P.M. 94. S.S. 82.)

July 19. Thursday. Howard is today thirty five years old, has four children, two boys and two girls, and is living "out in the country," as some say to oversee the work on the grain land. George was so anxious to get home and see to the harvesting of potatoes which he has planted on the Wilson place across the river, that he started by boat, through I fear he will have a relapse of the fever for doing so. Clarence Sutherland went with him. Received letters from Theresa, Hannah and Calvin, and wrote to Theresa. (T.S.R. 50. 2 P.M. 85. S.S. 66.)

July 20. Friday. Mr. Cooke came home without the children, leaving them at Lockeford. They were enjoying themselves so well that he allowed them a longer stay. Received letters from Horace, Calvin and Hannah, and wrote to Eunice and Hannah. The mail which was interrupted in its passage west from Chicago for three weeks, now goes and comes freely again. (T.S.R. 54. 2 P.M. 88. S.S. 70.)