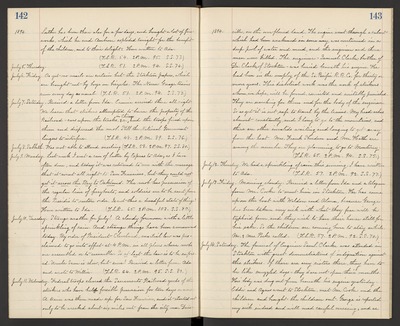 July 7. Saturday. Received a letter from Ida. Eunice arrived there all right. We learn what strikers attempted to burn the property of the Railroad - cars upon the tracks, x.c. in Chicago and the troops fired upon them and dispersed the mob. Still the National Government lingers to interfere. (T.S.R. 48. 2 P.M. 89. S.S. 76.)

July 9. Monday. Last week I sent a can of butter by Express to Ada, as I have often done, and today it was returned to me with the message that it went all right to San Francisco, but they could not get it across the Bay to Oakland. The mob has possession of the regular line of ferry boats, and soldiers are to be sent from the Presidio to restore order. Is not this a dreadful state of things? Have written to Ida. (T.S.R. 65. 2 P.M. 103. S.S. 80.)

July 10. Tuesday. Strange weather for July! A cloudy forenoon with a little sprinkling of rain. And strange things have been announced today. By order of President Cleveland, martial law was proclaimed to go into effect at 4 P.M. in all places where mobs are assembled or to assemble. So at last the law is to be enforced. Uncle Sam is slow, but sure! Received a letter from Ada and wrote to Willie. (T.S.R. 64. 2 P.M. 95. S.S. 80.)

July 11. Wednesday. Federal troops cleared the Sacramento Railroad yards of the strikers who have help forcible possession for ten days or more. A train was then made up for San Francisco, and it started out only to be wrecked about six miles out from the city near Davis -

1894. ville, on the over-flowed land, The engine went through a culvert which had been weakened in some way, was overturned in a deep pool of water and mud, and the engineer and three men were killed. The engineer - Samuel Clarke - brother of Dr. Clarke of Stockton - was buried beneath his engine. He had been in the employ of the So. Pacific R.R.Co. for thirty or more years. This diabolical work was the work of strikers whom, we hope, will be found, convicted and suitably punished. They are searching for them and for the body of the engineer. So as yet it is not safe to travel by the trains. My head aches almost constantly, and I long to go to the mountains, and there are other invalids waiting and longing to get away form the heat. Mrs. Frank Sherden and Mr. Hatch are among the number. They are planning to go to Monterey. (T.S.R. 65. 2 P.M. 94. S.S. 75.)

July 13. Friday. Morning cloudy. Received a letter from Ida and a telegram from Mr. Cooke to meet him in Stockton. He has come upon the boat with Weldon and Alma, because George has been taken very sick with what they fear will be typhoid fever, and they wish to have their house still for his sake. So the children are coming here to stay awhile. Mr. & Mrs. Perks called. (T.S.R. 57. 2 P.M. 92. S.S. 70.)

July 14. Saturday. The funeral of Engineer Saml. Clarke was attended in Stockton with great demonstrations of indignation against the strikers. If there are any rioters there, they have to be like muzzled dogs - they dare not open their mouths. His body was dug out from beneath his engine yesterday. Eddie and Agnes went to Stockton, met Mr. Cooke and the children and brought the children out. George is reported very sick indeed and will need careful nursing, and as