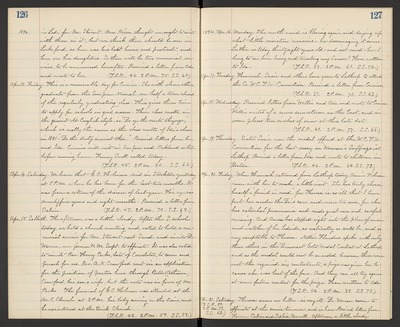 1894. in Lodi for Mr. Stewart. Mrs. Rixon thought we ought to unite with them in it, but we think there should be one in Lockeford, as here was his last home and pastorate, and here are his daughters. So there will be two memorial services, to be announced hereafter. Received a letter from Ada and wrote to her. (T.S.R. 48. 2 P.M. 75. S.S. 68.)

Apr. 13. Friday. This is a memorable day for Eunice. She with eleven others graduate from the San Jose Normal, one - half a term ahead of the regularly graduating class. This gives them time to apply for school in good season. Their class motto, in the quaint old English style, is, "Do ye the next thynge," which is really the same as the class motto of Ida's class in 1881 - "Do the duty nearest thee. "Received letters from her and Ida. Eunice will visit in San Jose and Oakland a while before coming home. Fanny Swett called today. (T.S.R. 45. 2 P.M. 80. S.S. 66.)

Apr. 15. Sabbath. The afternoon was a little cloudy. After the S. school today, we held a church meeting and voted to hold a memorial service for Mr. Stewart next Sund, and invite Dr. Warren, our former H.M. Supt. to officiate. It was also voted to invite Rev. Harry Perks, late of Coralitos, to come and preach for us. Rev. A.K. Crawford sent in an application for the position of pastor here through Belle (Athearn) Crawford, his son's wife, but the vote was in favor of Mr. Perks. The funeral of G.C. Holman was attended at the M.E. Church at 2 P.M. his body coming on the train, and he was interred at the Brick Church. (T.S.R. 42. 2 P.M. 59. S.S. 52.)

Apr. 20. Friday. When Hannah returned from Lathrop today, Annie Holman came with her to make a little visit. She has truly shown herself a "friend in need", for Theresa is so ill that I have put her under the Dr.'s care, and none too soon, for she has catarrhal pneumonia and needs great care and careful nursing. And Annie has stepped right into the place of nurse and watcher of her bedside, as naturally as could be, and is very acceptable to Theresa. Nellie Flanders spoke with only three others in the Demorest Gold Medal Contest at Lathrop and as the medal could not be awarded because there were not the required six contestants, a prize was given her because she was best of the four. And they can all try again at some future contest for the prize. Have written to Ada. (T.S.R. 54. 2 P.M. 88. S.S. 73.)