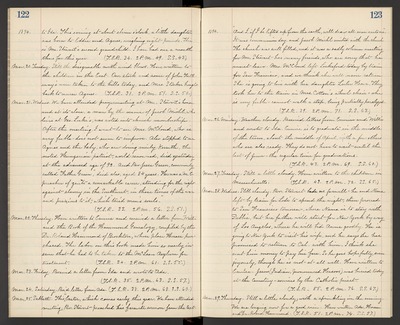 Mar. 20. Tuesday. Still the disagreeable north wind blows. Have written to the children in the East. Our stock and some of John Tretheway's were taken to the hills today, and Mrs. Stocker brought back to nurse Agnes. (T.S.R. 31. 2 P.M. 51. S.S. 50.)

Mar. 21. Wednes. We have attended prayermeeting at Mr. Stewart's house and at its close, a man by the name of Jacob Michl, who lives at Geo. Locke-s, was voted into church membership, after the meeting, I went to see Mrs. McCloud, who is very feeble - does not seem to improve. Also stopped to see Agnes and the baby, who are doing nicely. Kossuth, the noted Hungarian patriot, world - renowned, died yesterday at the advanced age of 92. And Rev. Jesse Green, commonly called "Father Green", died also, aged 84 years, He was a M.E. preacher of quite a remarkable career, standing for the right against slavery in the Southwest, in those times of the war and previous to it, which "tried men's souls". (T.S.R. 33. 2 P.M. 56. S.S. 51.)

Mar. 22. Thursday. Have written to Eunice and received a letter from Willie and the Book of the Hammond Genealogy, compiled by the Dr. Roland Hammond of Brockton, whose place Horace purchased. The labor on this book made him so nearly insane that he had to be taken to the McLean Asylum for treatment. (T.S.R. 34. 2 P.M. 61. S.S. 55.)

Mar. 25. Sabbath. This is Easter, which comes early this year. We have attended meeting. Rev. Stewart preached his farewell sermon from the text,

1894. "And I, if I be lifted up from the earth, will draw all men unto me". It was communion day, and Jacob Michl united with the church. The church was well filled, and it was a sadly solemn meeting for Mr. Stewart has many friends, who are sorry that he must leave. Mrs. McCloud left Lockeford today by train for San Francisco, and we think she will never return. She is going to live with her daughter Lulu Howe. They took her to the train in Mrs. Cotton's wheel-chair - she is very feeble - cannot walk a step, being partially paralyzed. (T.S.R. 39. 2 P.M. 71. S.S. 63.)

Mar. 26. Monday. Weather cloudy. Received letters from Eunice and Willie and wrote to Ida. Eunice is to graduate in the middle of the term, about the middle of April, with a few others who are also ready. They do not have to wait until the last of June - the regular time for graduations. (T.S.R. 43. 2 P.M. 69. S.S. 60.)

Mar. 28. Wednes. Still cloudy. Rev. Stewart bade us farewell - he and Nema left by train for Lodi to spend the night, then proceed to San Francisco tomorrow, where Nema is to stay with Debbie, but her father will start for New York by way of Los Angeles, where he will bid Anna goodby. He is going to New York to visit his wife, and he says she has promised to return to Cal. with him. I think she sent him money to pay his fare. So he goes hopefully, even joyously, though he is not at all well. Have written to Eunice. Jesus (Indian, pronounced Hasoos) was buried today at the Cemetery - services by the Catholic priest. (T.S.R. 55. 2 P.M. 76. S.S. 67.)