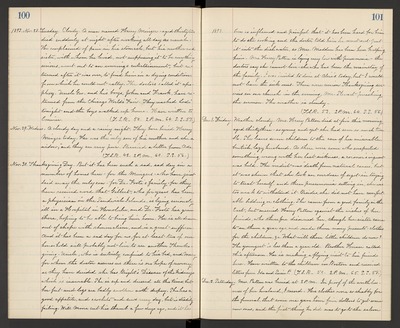 1893. Nov. 28. Tuesday. Cloudy. A man named Harry Minger - aged thirtytwo died suddenly at night after working all day as usual. He complained of pain in his stomach, but his mother and sister, with whom he lived, not supposing it to be anything serious, went out to an evenings entertainment, but returned after it was over, to find him in a dying condition, from which he could not rally. The doctors called it apoplexy. Uncle Geo. and his boys, John and Frank, have returned from the Chicago World's Fair. They reached Lodi tonight and the boys walked up home. Have written to Eunice. (T.S.R. 50. 2 P.M. 64. S.S. 57.)

Nov. 30. Thanks giving Day. But it has been such a sad, sad day in a number of homes here - for the Mingers - who have just laid away the only son - for Dr. Foote's family - for they have received word that Gilbert, who for years has been a physician in the Sandwich Islands, is lying seriously ill in a Hospital in Honolulu, and Dr. Foote has gone there, hoping to be able to bring him home. He is all drawn out of shape with rheumatism, and is a great sufferer. And it has been a sad day for us, for atleast two of our household will probably not live to see another Thanksgiving. Uncle, who is entirely confined to his bed, and Mary for whom the doctor assures us there is no hope of recovery, as they have decided she has Bright's Disease of the kidneys which is incurable. She is up and dressed all the time, but her feet and legs are badly swollen with dropsy. She has a good appetite, and crochets and sews every day, but is steadily failing, Will Moore cut his thumb a few days ago, and it has

1893. been so inflamed and painful that it has been hard for him to do the cooking and the doctor told him he must not put it into the dishwater, so Mrs. Madden has been here helping him. Mrs. Harry Patton is lying very low with pneumonia - the doctors say she cannot live - she, who has been the main stay of the family. I was invited to dine at Alice's today, but I would not leave the sick ones. There were union Thanksgiving services in our church in the evening. Mr. Stewart preaching the sermon. The weather is cloudy. (T.S.R. 53. 2 P.M. 64. S.S. 56.)

Dec. 1. Friday. Weather cloudy. Mrs. Harry Patton died at five this morning aged thirtythree - so young and yet she had seen so much trouble. She leaves seven children to the care of her miserable, brutish, lazy husband. As there were some who suspected something wrong with her last sickness, a coroner's inquest was held. The verdict was "death from natural causes", but it was shown that she took an overdose of ergot in trying to treat herself, and then pneumonia setting in, she was too weak to withstand it. Besides, she did not have comfortable bedding or clothing. She came from a good family in the East, but married Harry Patton against the wishes of the friends, who therefore disowned her, though her sister came to see them a year ago, and made them many presents - clothes for the children, D.C. What will those little children do now? The youngest is less than a year old. Brother Horace called this afternoon. He is making a flying visit to his friends here. Have written to the children in Boston and received letters from Ida and Susie P. (T.S.R. 50. 2 P.M. 65. S.S. 58.)

Dec. 2. Saturday. Mrs. Patton was buried at 2 P.M. In proof of the worthlessness of her husband, I record. His clothes were so shabby for the funeral, that someone gave him five dollars to get some new ones, and the first thing he did was to go to saloon