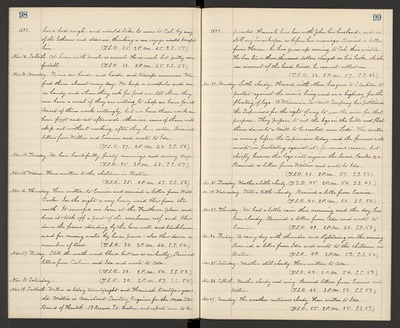 Nov. 13. Monday. Times are harder and harder and tramps numerous. We feed them almost every day. We keep a woodpile and an ax handy, and when they ask for food we tell them they can have a meal if they are willing to chop an hour for it. Most of them work willingly, but we have them work an hour first and eat afterwards, otherwise some of them will skip out without working after they have eaten. Received letters from Willie and Eunice and wrote to Ida. (T.S.R. 37. 2 P.M. 68. S.S. 58.)

Nov. 16. Thursday. Have written to Eunice and received a letter from Will Cooke. In the night a very heavy wind blew from the north. It unroofed our barn at the Faulkner place and here it took off a part of the corn house roof and blew down the frame standing by the barn well and tank house used for raising water by horse power - also blew down a number of trees. (T.S.R. 34. 2 P.M. 64. S.S. 54.)

Nov. 19. Sabbath. Willie is today twentyeight and Hannah Twentysix years old. Willie is Assitant Sanitary Engineer for the Mass. State Board of Health - 13 Beacon St. Boston, and expects soon to be

1893. promoted. Hannah lives here with John, her husband, and is still my house keeper, as before her marriage. Received a letter from Horace - he has given up coming to Cal. this winter. He has two or three thousand dollars charged on his books, which, on account of the hard times, he cannot collect in. (T.S.R. 32. 2 P.M. 57. S.S. 48.)

Nov. 20. Monday. Little cloudy. Howard with others, has gone to Stockton to protest against the river's being used as a highway for the floating of logs. A Wisconsin Saw Mill Company has petitioned the Supervisors for the right of way to use the river for what purpose. They propose to cut the logs in the hills and float them down to a Mill to be erected near Lodi. The matter is coming before the Supervisors today, and the farmers will unite in protesting against it, for various reasons, but chiefly because the logs will injure the levers, banks, D.C. Received a letter from Willie and wrote to Ida. (T.S.R. 28. 2 P.M. 57. S.S. 50.)