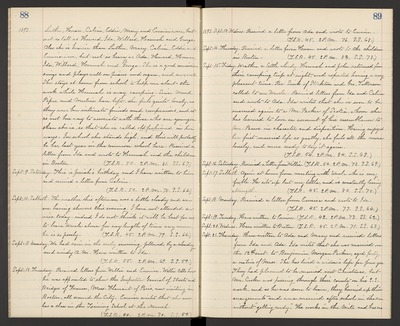 1893. Luther, Horace, Calvin, Eddie, Mary and Eunice were, but not so tall as Howard, Ida, Willard, Hannah and George. Also she is heavier than Luther, Mary, Calvin, Eddie and Eunice were, but not so heavy as Ada, Howard, Horace, Ida, Willard, Hannah and George. She is a good musician sings and plays well on piano and organ, and sews well. She stays at home from school to help me about the work while Hannah is away camping. Since Moud Piper and Mertice have left, she feels quite lonely, us they were her intimate friends and companions, and it is not her way to associate with those who are younger than she is, so that she is called old fashioned in her ways. In school she stands high, and this will probably be her last year in the common school here. Received a letter from Ida and wrote to Hannah and the children in Boston. (T.S.R. 50. 2 P.M. 81. S.S. 67.)

Sep. 10. Sabbath. The weather this afternoon was a little cloudy and we are having showers this evening. I have not attended service today - indeed I do not think it will be best for us to leave Uncle alone for any length of time any more, he is so poorly. (T.S.R. 45. 2 P.M. 79. S.S. 66.)

Sept. 12. Tuesday. Received letters from Willie and Eunice. Willie tells how he was appointed to show the Inspector General of Streets and Bridges of France, Mons, Flamant of Paris, now visiting in Boston, all around the City. Eunice writes that she now has a class in the Training School at the Normal. (T.S.R. 40. 2 P.M. 70. S.S. 59.)

Sept. 15. Friday. Weather a little cloudy. Hannah and John returned from their camping trip at night, and reported having a very pleasant time. Rev. Sink of Stockton and Geo. Tatterson called to see Uncle. Received letters from Ida and Calvin and wrote to Ada. Ida writes that she is soon to be married again to a Mr. Parker of Scotia, whom she has learned to love on account of his resemblance to Mr. Pascoe in character and disposition. Having enjoyed her first married life so greatly, she feels all the more lonely, and more ready to try it again. (T.S.R. 54. 2 P.M. 84. S.S. 63.)

Sept. 21. Thursday. Have written to Ada and Mary and received letters from Ida and Ada. Ida writes that she was married on the 12 inst, to Benjamin Morgan Parker, aged forty, a native of Mass. She has lived a widow's life for four yrs. They had planned to be married next Christmas, but Mr. Cooke was passing through their county on his S.S. work, and as he was soon to leave, they hurried up their arrangements and were married after school in the eve without "getting ready." He works in the Mill and has no