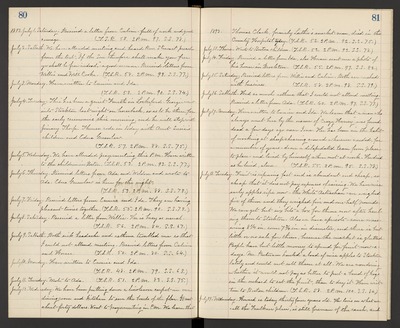 July 4. Tuesday. This has been a quiet Fourth in Lockeford. Georgie went into Stockton last night on horseback, so as to be there for the early ceremonies this morning, and he will stop with Jimmy Thorp. Theresa rode in today with Aunt Susie's children and Edna Greenlaw. (T.S.R. 57. 2 P.M. 88. S.S. 75.)

July 12. Wednesday. We have been putting down a linoleum carpet on our dining room and kitchen to save the boards of the floor. It cost about forty dollars. Went to prayermeeting in P.M. We learn that

July 17. Monday. Have written to Eunice and Ida. We learn that a man who always went here by the name of "Crazy Harvey" was found dead a few days ago near Ione. He has been in the habit of working at sheepshearing around wherever needed, for a number of years - drove a dilapedated team from place to place - and lived by himself when not at work. He died as he lived, alone. (T.S.R. 55. 2 P.M. 95. S.S. 78.)

July 18. Tuesday. Fruit is ripening fast and is abundant and cheap, so cheap that it does not pay expenses of raising. We have nice early apples ripe now - the White Astrachan - we weighed five of them and they weighed five and one-half pounds. We can get but six bits a box for them now after hauling Them to Stockton. Also we have apricots - some measuring 8 1/4 in, some 7 3/4 in, in diameter, and there is but little or no sale for them, because the market is glutted. People have but little money to spend for fruit now-a-days. Mr. Putnam hauled a load of nice apples to Stockton lately and could not sell them at all. We are wondering whether it would not pay us better to put a band of hogs in the orchard to eat the fruit, than to dry it. Have written to Boston children. (T.S.R. 58. 2 P.M. 100. S.S. 84.)

July 19. Wednesday. Howard is today thirty four years old. He lives- on what we call the "Faulkner place", is still foreman of the ranch, and