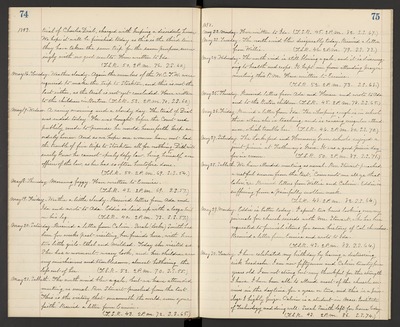 1893. trial of Charles Dial, charged with keeping a disorderly house we hope it will be finished today as this is the third time they have taken the same trip for the same purpose, seemingly with no good results. Have written to Ida. (T.S.R. 50. 2 P.M. 76. S.S. 60.)

May 17. Wednes. A rainy morning and a cloudy day. The trial of Dial was ended today. He was brought before the Court and publicly made to promise he would henceforth keep an orderly house. And so we hope our women have not had he trouble of five trips to Stockton all for nothing. Dial will surely know he cannot openly defy law, being himself. an officer of the law, as he has so often heretofore done. (T.S.R. 50 2 P.M. 69. S.S. 54.)

May 20. Saturday. Received a letter from Calvin, Sarah (Locke) Smith has been for weeks past visiting her friends here, with her two little girls - Ethel and Mildred. Today she visited us, She has a wornout, weary look, and her children are very mischievous and troublesome, almost bothering the life out of her. (T.S.R. 52. 2 P.M. 70. S.S. 55.)

May 28. Sabbath. We have attended meeting as usual. Rev. Stewart preached a restful sermon from the text, "Come unto me all ye that labor," D.c. Received letter from Willie and Calvin. Eddie is suffering from a painfully swollen neck. (T.S.R. 48. 2 P.M. 82. S.S. 64.)

May 29. Monday. Eddie is better today. I spent two hours looking over my journal for church records with Mr. Stewart, who has been requested to furnish items for some history of Cal. churches. Received a letter from Eunice and wrote to Ida. (T.S.R. 43. 2 P.M. 83. S.S. 64.)

May 30. Tuesday. I have celebrated my birthday by having a distressing sick headache. I am now fifty seven and Calvin twenty four years old. I am not strong but very thankful for the strength I have. I have been able to attend most of the church services in the daytime, for a year or two, and this is a privilege I highly prize. Calvin is a student in Mass. Institute of Technology and doing well. Sarah Smith left for home today. (T.S.R. 43. 2 P.M. 86. S.S. 74.)