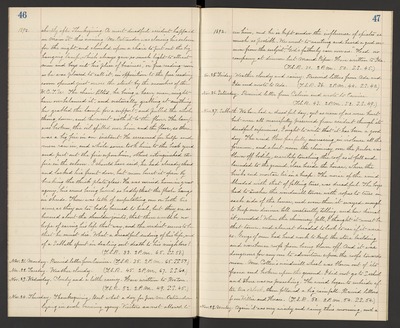 1892. shortly after Thanksgiving. A most dreadful accident happened on Main St. this evening. Mr. Ostrandeer was closing his saloon for the night, and climbed upon a chair to put out the big hanging lamp, which always gave so much light to attract men and boys into his "place of business", or "free reading-room" as he was pleased to call it, in opposition to the free reading room opened just across the street by the members of the W.C.T.W. The chair tilted, he being a heavy man, might have overbalanced it, and naturally grabbing at anything, he grabbed the lamp for a support, and pulled the whole thing down, and he went with it to the floor. The lamp was broken, the oil spilled over him and the floor, so there was a big fire in an instant. He screamed for help and men ran in, and while some took him to the back yard and put out the fire upon him, others extinguished the fire in the saloon. I should have said, he had already closed and locked his front door, but men burst it open by breaking the thick plate glass. He was carried home in great agony, his arms being burned so badly that the flesh hangs in shreds. There was talk of amputating one or both his arms, as they are too badly burned to heal, but they are so burned about the shoulder joints, that there would be no hope of saving his life that way, and the verdict seems to be that he must die. What a dreadful ending of his life, and of a Sabbath spent in dealing out death to his neighbors! (T.S.R. 33. 2 P.M. 65. S.S. 58.)

Nov. 24. Thursday. Thanksgiving. But what a day for poor Mr. Ostrander lying in such burning agony. Visitors are not allowed to

Nov. 27. Sabbath. We have had a dreadful day, yet as none of us were hurt but were all mercifully preserved from accident through its dreadful experiences, I ought to write that it has been a good day. The wind blew fearfully increasing in violence all the forenoon, and about noon the chimney over the parlor was blown off bodily, scarcely touching the roof as it fell and bounded to the ground, close beside the house, where the bricks and mortar lie in a heap. The noise of the wind blended with that of falling trees, was dreadful. The boys had to anchor the windmill tower with ropes to trees on each side of the house, and even then it swayed enough to keep our dinner bell constantly tolling, and how dismal it sounded! When the chimney fell, I thought it must be that tower, and almost dreaded to look to see if it were so. Gangs of men had hard work to keep the store building and warehouse roofs from being blown off. And it was dangerous for anyone to adventure upon the roofs towards noon. Mrs. Cotton's windmill wheel was blown out of its frame and broken upon the ground. I did not go to S. School and there was no preaching. The wind began to subside after two o'clock, then followed a big rainfall. Received letters from Willie and Horace. (T.S.R. 52. 2 P.M. 54. S.S. 54.)

Nov. 28. Monday. Again it was very windy and rainy this morning, and a