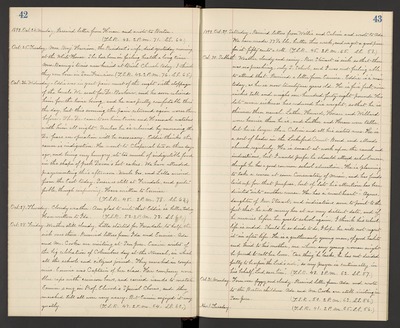 Oct. 26. Wednesday. Eddie was in great pain most of the night with stoppage of the bowels. We sent for Dr. Barbour, and he soon relieved him for the time being, and he was pretty comfortable this the day, but this evening the pain returned again worse then before. The Dr. came to see him twice and Hannah watches with him all night. Unless he is relieved by morning the Dr. fears an operation will be necessary. Eddie thinks the cause is indigestion. He went to Chaparral two or three days ago, and being very hungry, ate too much of indigestible food in the shape of Jack Devon's hot cakes. We have attended prayermeeting this afternoon. Uncle Geo. and Lilla arrived from the East today. Susie is still at Ferndale, and quite feeble, though improving. Have written to Eunice. (T.S.R. 45. 2 P.M. 78. S.S. 68.)

Oct. 28. Friday. Weather still cloudy. Lilla started for Ferndale, to help the sick ones there. received letters from Ida and Eunice. Ada and Mr. Cooke are visiting at San Jose. Eunice writes of the big celebration of Columbus day at the Normal, in which all the schools and citizens joined. They marched in companies. Eunice was Captain of her class. Her company wore blue caps with crimson bows, and carried wands to match. Eunice sang in Prof. Elwood's Special chorus, and they marched till all were very weary. But Eunice enjoyed it very greatly. (T.S.R. 48. 2 P.M. 64. S.S. 60.)

Oct. 30. Sabbath. Weather cloudy and rainy. Rev. Stewart is sick so that there was no preaching, only S.School, and I was not feeling able to attend that. Received a letter from Eunice. Eddie is a "man" today, as he is now twenty one years old. He is five feet, nine inches tall and weighs one-hundred forty-eight pounds. His late severe sickness has reduced his weight, so that he is thinner than usual. Luther, Howard, Horace and Willard were heavier than he is, and Luther and Horace were taller, but he is larger than Calvin and all his sisters were. He is a sort of leader in the Lockeford Cornet Band, and attends church regularly. He is smart at work upon the ranch and industrious, but I would prefer he should attend school more, though he has a good common school education. He is planning to take a course at some Conservatory of Music, and has funds laid up for that purpose, but of late his attention has been diverted into another course. He has a "sweetheart"- Agnes, daughter of Rev. Stewart, and indications seem to point to the fact that he will marry her at no very distant date, and if he marries before he goes to school again, I think his school life is ended. Should he so decide to do, I hope he will not regret it in after life. He is gentlemanly young man, of good habits and kind to his mother, one whom any young woman might be proud to call her lover. "One thing" he lacks, he has not decided fully to be upon "the Lord's side", so my prayer is continually in his behalf, "Lord, save him". (T.S.R. 48. 2 P.M. 62. S.S. 57.)