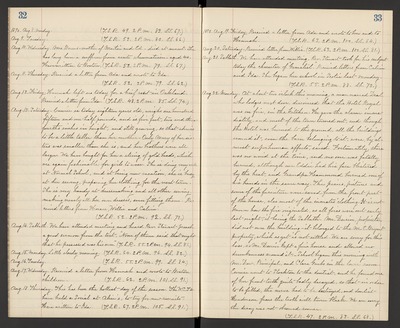 Aug. 13. Saturday. Eunice is today eighteen years old, weighs one hundred fifteen and one half pounds, and is five feet, tow and three fourths inches in height, and still growing, so that she is to be a little taller than her mother. Only Mary of her sisters was smaller than she is, and her brothers were all larger. We have bought for her a string of gold beads, which are again fashionable for girls to wear. She is doing very well at Normal School, and it being now vacation, she is busy at her sewing, preparing her clothing for the next term. She is very handy at dressmaking and all other sewing, making nearly all her own dresses, even fitting them. Received letters from Horace, Willie and Calvin. (T.S.R. 52. 2 P.M. 92. S.S. 78.)

Aug. 22. Monday. At about two o'clock this morning, a man named Deal, who lodges next door, discovered that the Hotel Royal was on fire, in the kitchen. He gave the alarm immediately, and most of the town turned out, and though the Hotel was burned to the ground, all the buildings around it, even the barn belonging to it, were by almost superhuman efforts, saved. Fortunately, there was no wind at the time, and no one was fatally burned, although our Eddie had his face blistered by the heat, and Grandpa Hammond burned one of his hands in the same way. The piano, pictures and some of the furniture were saved from the front part of the house, also most of the inmates clothing. It is not known how the fire originated, as all fires were out early last night, it being the Sabbath. Mr. Deerin, proprietor, did not own the building - it belonged to the M.E.Bryant property, which as yet is not settled. We are sorry for this loss, as Mr. Deerin kept a fine house and allowed no drunkenness around it. -School began this morning with Mr. Dow, Principal, and Clara Grubs in the lower room. Eunice went to Stockton to the dentist, and he found one of her front teeth quite badly decayed, so that in order to be filled, the nerve had to be destroyed, and dentist Henderson fears the tooth will turn black. We are sorry the decay was not observed sooner. (T.S.R. 47. 2 P.M. 83. S.S. 68.)